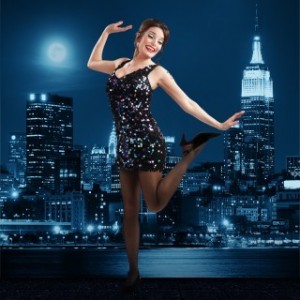 It’s over a decade since the Nottingham Playhouse produced a musical, but boy, have they come back with a bang.
It’s a curious choice but Sweet Charity is a big stunning Technicolor production of non-stop dance routines, music, laughter and fun.  Tremendously led by Olivier award-winning actress Rebecca Trehearn as Charity, going gooey over unsuitable men
Charity first breathed life as a role from director-choreographer Bob Fosse to his then-wife Gwen Verdon, Sweet Charity ran for 608 performances after opening in 1966 at Broadway’s Palace Theatre. It garnered nine Tony nominations and Fosse took home the award for best choreography, setting him up for his film debut directing the 1969 movie version that starred Shirley MacLaine.
In the ‘Me Too’ generation some of the content could sit uncomfortably but our heroine plays it with innocence and likability, her suitors as dumb, that it kind of glosses over it. You can’t help but be enchanted by her determination to find love in a cruel world. A hopeless romantic who still believes in love.
Now let’s get one thing straight, Charity isn’t a prostitute; she’s a dancer, whom man pay to dance with although some of the girls give extras. On paper it might not sound the ideal vehicle for comedy, though we all loved Pretty Woman and there are echos of that in the hotel scene with Vittorio Vidal (Jeremy Secomb) for the much-loved If They Could See Me Now,but a throw in a witty script and some show stopping songs and it’s throughly entertaining.
There are some laugh out loud lines. One of the other “hostesses” at the Fandango Ballroom quips that they don’t so much dance as defend themselves to music.  Charity wants more out of life than serial thug boyfriends and being groped lovelessly. “There’s Gotta Be Something Better Than This,” “Baby, Dream Your Dream,” and “Where Am I Going?” are the titles of three of the top-drawer Cy Coleman–Dorothy Fields songs.
The harsh realities of her world always apparent, Alistair Davids’ choreography for the iconic ‘Big Spender’ is fantastic but rather mechanic rather than seductive suggesting the world of dance hall hostesses is glamorously sexualised. Support comes from Charity’s co-workers, the dry wit of  Helene from Carly Mercedes Dyer and a poised and confident Nickie from Amy Ellen Richardson their ‘Baby Dream Your Dream’ is bittersweet perfection.
Fresh from playing the part of the horrible Issac in Holby City, Marc Elliott takes on the role of Oscar Lindquist. For a while we think he’s almost likeable again as Charity’s nervous suitor but again (spoiler alert) she’s let down.
The Rhythm Of Life is another standout performance led by Shaq Taylor as Daddy Brubeck and yet another show stopper from this tireless company who display non stop energy from the bright and breezy all American start to the awkward finish.  Just when you think you’ve got your happy ever after cheesy ending, the plot continues.
The set design from takis is one of he finest I’ve seen at Nottingham Playhouse if not anywhere, his interactive performance installations gliding on and off stage, providing the perfect setting for ‘that ending’ as Charity walks off into an orange lit hue.  It’s not the ending you want but it’s a poignant reminder of reality and confirmation that a really good musical can transcend the tests of time.
Sweet Charity runs at Nottingham Playhouse until Saturday, September 22. Tickets are £8.50 to £45 from the box office on 0115 914 9419 and nottinghamplayhouse.co.uk.
By Tanya Louise
Editor
@tanyalouise_
tanyalouise.net
Disclaimer:  My tickets were complimentary but my views are my own.