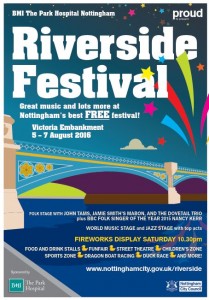 What a great weekend of entertainment in beautiful sunshine. This year we decided to focus on one area to enjoy. As the programme cover had the folk stage highlighted it was a no brainier, nearest to the parking too, £6 a day a real bargain.

The big top green stripes were easy to find and had two sides open to let the breeze in which of course attracted more people. The area was comfortably full and the atmosphere lighthearted maybe the close vicinity to the real ale bar helped.

Highlights of Saturday for me were The Hut People an English instrumental duo, two great guys extremely talented and as the programme rightly said unique. Then we were treated to the Dovetail trio, these three were great, younger than you would normally expect to be singing traditional folk songs, but it works, they were great. However the married couple Nancy Kerr and James Fagan were so enjoyable, so talented and what beautiful voices and stories to accompany the songs. Nancy’s songwriting is exquisite and her voice ditto. It was the traditional song that I enjoyed the most though Dance to thy Daddy, written in Berkshire, funny that as it is landlocked and the some is about fish, herring in particular, but I learnt with the arrival of the steam train, fish were in plentiful supply from billingsgate and even the poorest could afford Herring.

Sunday there were three acts on the programme and I enjoyed all three, but John Tams (7 times winner of the BBC2 folk award) and Barry Coope just had the audience in the palm of their hand, two or three of the songs quite emotional, Over the Hills and Far Away and of course the songs from War Horse. The audience felt privileged to see and hear such an array of British world class Folk talent, thank you to all those involved in bringing these great folk to the riverside.