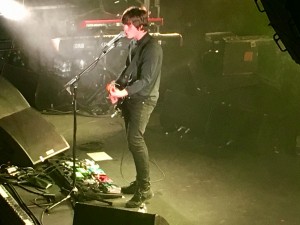 “I’m just a poor boy from Nottingham, I had my dreams but in this world they’re gone, Oh I’m so lonesome on my one” Released earlier this year ‘On my One‘ already has the feel of a classic, as Jake Bugg casually steps up to the mic at this, his homecoming gig at Rock City full of melancholy and pathos.

He may only be 22 but already Jake has gained a substantial following, strolling onto the stage with minimum fuss, there was no causal reaction from the crowd as the audience, a mixture of ages, go into a complete frenzy, it is clear that our Clifton lad done-good is adored by his home crowd.  Reflecting the song title, he  stands on the dimly lit  stage in the  spotlight, beginning his 45 minute set with an acoustic performance that characterises his early gigs.

Dressed in dark top, black jeans and trainers, the mop-topped singer couldn’t have worn anything better to suit his chilled out attitude, standing innocently soaking up the adoration as  he plays through Strange Creatures, The Love We’re Hoping For and Simple as This  before introducing his  talented three-piece band, moving effortlessly from loneliness, to vocally sticking two fingers up and moving on as the audience erupt to “Two Fingers‘, still one of his finest and almost a Nottingham anthem. The tempo never really drops with country rock n roll , each track a crowd pleaser as they sing back at him  songs from the first two albums and the traditionally difficult third album,  as Jake wanders occasionally from the mic in thoughtful gaze. 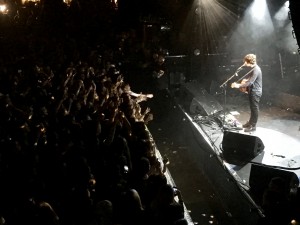 In terms of stage presence, other than a few thank you’s and mentions of being home, he doesn’t really day a lot ans he doesn’t move about much either other than to change guitars, it was nothing but what Jake does best – music. Throughout the show, he proves he’s not just a unique vocal talent, as he performed a couple of impressive electric guitar solos. A musicianship of really someone more than twice his age.
His voice is maturing over time, still effortlessly hitting the high notes, he’s not quite mastered the classic rock growl of Johnny Cash – yet, but he’s getting there, drawing cheers from the crowd who recognise his passion as the crowd scream back lyrics from the likes of Taste It, Slumsville Sunrise, Gimme The Love. One of the highlights of the night, and one which will never grow old, is when he brilliantly performs the ballad ‘Broken‘
Heaps of passion and enthusiasm, finishing the set  with ‘Lightning Bolt’ Jake proves he is back, only getting better and definitely here to stay.
Words and photos by Tanya Raybould
Editor
@tanyalouiseray