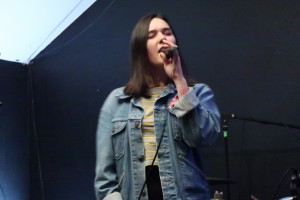 Kicking off the Hustle for me were pop-punk band Homesick in Rough Trade, they’re all high energy, crunchy riffs, topped with solos. It’s their first gig with a new guitarist and a new bassist but they still sound pretty tight. They’re completely inoffensive but I have an irrational dislike for bands where the drummer has one of those tiny cymbals. However, much kudos to anyone who can put on such a kinetic display while most people are still in the post-Sunday lunch slowdown. 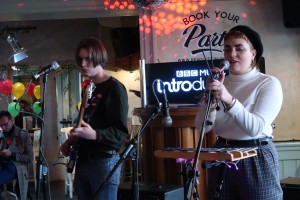 Like all good hen dos, it’s then off to Revolution to catch Cherry Hex & The Dream Church. Their excellent psychedelic-tinged dream pop feels a little incongruous while the sun is still shining outside. Liam Gallagher recently did a puff piece interview for his new album where he was disparaging of glockenspiels but Cherry Hex proves just how wrong he is. Songs such as recent single Tosca demonstrate the amazing range of sounds that can be achieved with a bass guitar. Maddy mentions that she has a chest infection but, unlike Theresa May recently, she still manages to put on a good performance. 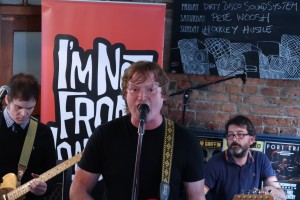 Downstairs at The Angel, Lois is either 20 or 50 years out of time – at their best, they sound like Oasis or The Yardbirds but at their worst, they sound like the sort of album track filler that Paul Weller or Ocean Colour Scene would have released in 1997. They have a song about Sid James, which demonstrates just how nostalgic and referential to the past they can be – have they listened to any new music? I should like this band but I’m affronted by the bassist’s facial hair and the fact that the singer doesn’t look like a frontman, the guitarist will easily get a gig when the next mod revival comes round though. Help Me Now does sound a little bit different, more like The Only One I Know but with guitar rather than a keyboard, although they seem to forget how the song ends. 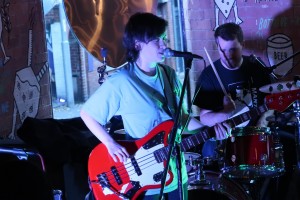 The Ganglions at Brewdog are clearly very popular as there is a queue to get in and after waiting for the one in-one out I finally get in to see a band that I misread as the “gang lions” (that would be a cool gang right?) In actuality, they’re a pretty cool math-rock/post-rock three-piece. 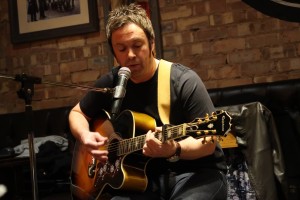 Over at Six Barrels, Gas Panic is half-way through a set and he is busy telling someone in the audience “I don’t do Amy Winehouse, she was too thin and had a shit haircut” before launching into Cum On Feel The Noize. As you might expect from an act named after a track on the worst Oasis album, it’s all perfectly adequate (there’s the pull quote for the next gig!) although it would probably play pretty well later at night, after people had a few more beers and were singing along to the covers that sound like they’re supposed to sound. Although, someone needs to tell him that just because he likes Oasis, he doesn’t need to act like the Gallagher brothers as he throws a right paddy after a woman accidentally clips his microphone stand on the way to the toilet. 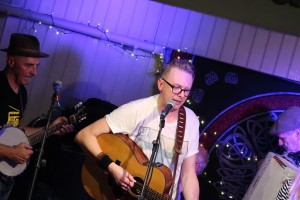 Downstairs at The Lord Nelson, it’s very full and very hot for DH Lawrence & The Vaudeville Skiffle Show. I’m not sure whether it’s strictly skiffle, it’s more nu-folk (or whatever they called that scene around Mumford & Sons), all high energy accordion, fiddle, and banjos. Anybody who knows me will know that I always enjoy a band with a proper double-bass and there is such infectious fun here that I’m willing to excuse the terrible bit of scarring in the final song. 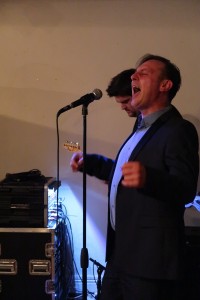 I expected to arrive 20 minutes early for Blue Vulture at Bunkers Hill but, due to the vagaries of festival time changes, I only actually caught their last song. It’s harsh to judge on just one song but from what I saw they sounded like one of those bands that were briefly big in 1998 after being signed as part of the long tail of Britpop indie (disclaimer – I actually quite liked some of those bands, such as Rialto) 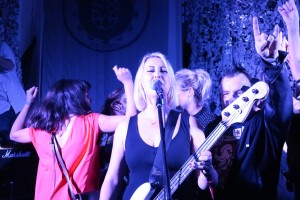 While set times had gone out of the window at Bunkers Hill, things were just running a little bit late at The Angel, which meant that I got to catch the end of You Want Fox. While they are also bass-led and guitar-free, their garage rock/punk sound is a world away from the earlier Cherry Hex & The Dream Church. Big Girls sounds like Yeah Yeah Yeahs And before the awesome set closer Ex-Boyfriend they tell anyone that is offended by swearing to fuck off. As the crowd invades the stage, the song reminds me of an angry Sleeper, although I doubt Louise Wener ever swore this much. 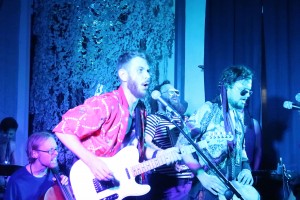 Staying upstairs in The Angel, it’s Seas Of Mirth And when 9 people gone onstage dressed in piratical/nautical garb, the only word that springs to mind is “shanty”. The keyboard and cello make it a little bit proggy but they’re still the best pirate dance band this side of The Black Pearl. Their intro music is Heaven Is A Place On Earth by Belinda Carlisle but the words “Seas Of Mirth” dubbed over the last part of the line. Easily one of the most fun bands I have ever seen, their cover of Boney M’s Rasputin is great and they have a mid-set tug of war between two sides of the audience. Obviously. For the last song, there is a lobster stage invasion, which brings to mind Slaves when they perform Feed The Manta Ray. I’m not sure that I’d necessarily buy any of their music but I’d definitely go and see them live again. 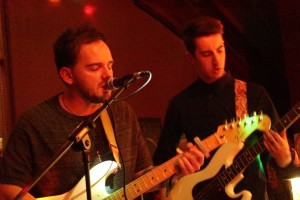 Finally, it’s off to newly opened El Capo to catch Black Cats & Magpies. Here’s a band very much in thrall to mid-00s indie, one song that sounds like The Killers, a couple that sounds like generic landfill indie and an opener with a touch of The Artic Monkeys. Unfortunately, the levels don’t quite sound right through the set so it’s not possible to compare the lyrics with Alex Turner, although they don’t seem to have as much charisma as Sheffield’s second finest (Pulp for me but if you said Def Leppard or Human League, I wouldn’t argue too much). One thing that I have noticed today is the propensity for bass players these days to have their top button done up, what’s that about? The one in Black Cats & Magpies also has a flat-top, which he probably thinks makes him look like Andy Rourke from The Smiths but to my eyes just made me think of Neil from The Inbetweeners. He’s a good bassist though, which is more important than how he looks, I guess.

Phew, another amazing day at the Hustle and for every great act that I saw, there were dozens of more things that I missed but this is one of those days where you park the FOMO and just enjoy yourself.