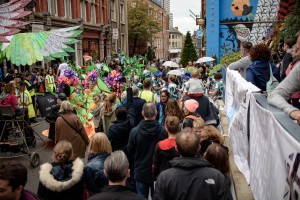 Hockley Hustle reaches its tenth event with 300 acts spread over 25 venues. How do you select from such a smorgasbord of music? We followed our nose and our ears and checked out a range of what was on offer

Easing into the day with folk trio King of Rome, named after a racing pigeon. Following opener Johnny Come Lately, the guitarist proceeds to swap his guitar for a mandolin or a bouzouki for various songs including a song about trucking in Lincolnshire and a Waterboys’ cover. Not an unpleasant way to start the festival.

The five-piece indie rock band come onto stage 15 minutes late (despite being the first band of the day at the venue) They then have to stop after just one song due to technical difficulties. It’s a shame as they sounded like they might have been alright but after waiting around for another 15 minutes for things to be fixed, I headed off to another venue.

Named after the villain in The Secret of Monkey Island computer games, they open with a song that takes its chorus from one of the famous sword fights in that game, “how appropriate you fight like a cow” They notionally have two bassists but one plays his like a four-string guitar and they make really good use of having two lead singers and two on backing vocals. Unlike a lot of heavier bands, they have a lot more depth and melody – songs like Psycho Mantis have a guitar solo but it doesn’t overwhelm the main riff. Le Chuck are also a thoroughly entertaining band including scanning the audience with a PKE meter from Ghostbusters and I couldn’t help but smile at lyrics such as “I watched The West Wing and I thought that it was real”

The four-piece punk band mention that they have been together for 22 years. Despite their age, the guitarist is still a rebel as he demonstrates by having an e-cigarette hanging out of the corner of his mouth on stage. There are a couple of riffs that sound like they were borrowed from the Ramones, which is a good thing, and there are also a bit of early Green Day. The guitarist from Thee Eviltones joins for the last two songs, which are a slightly anarchic, brilliant end to the show.

Playing their first gig in two years, they come across as one of those modern, earnest indie bands that can clearly play but that lack a little bit of excitement. This is evidenced by there being a roomful of nodding heads. Calling a song Mary Jane isn’t edgy when your music is about as edgy as a satsuma. To be fair that’s probably their best song though, a little bluesier and a bit more upbeat. The nearest thing I could compare them to is George Ezra crossed with later Kings of Leon, which I know a lot of people would like the sound of.

These days there are a lot of bands with really clever or pretentious names, Riff Bastard are not one of them – they sound just like you’d expect a band called Riff Bastard to sound. With a really heavy sound and deep, throaty vocals they sound a bit like Metallica. Early Metallica. Good Metallica. Not making rubbish albums with Lou Reed Metallica.

Angels in the Architecture – Das Kino

A three-piece featuring keyboards, drums and a shoeless bassist. In the main they sound like Dark Side of the Moon-era Pink Floyd and you could imagine them soundtracking sci-fi films. There are a few too many effects on the vocals, which make it hard to make out most of the words. Even Peter Frampton knew his limits. There are also elements of 60s easy listening and jazz, which isn’t as good as the atmospheric stuff.

My favourite band that I saw at this year’s Hustle. Featuring James, the lead singer from Grey Hairs, I could hear so many great influences in their music. The Breeders, 60s pre-punk like the MC5, The Rolling Stones, The White Stripes, Talking Heads. They manage to take all of these influences and make it their own. A genuinely exciting discovery.

Another band where it’s not just a clever name – they are all milky white and are just about funky enough to be disco. The keyboardist has plenty of toys, which reminded me a bit of Hot Chip and the set-opener which includes the refrain “first things first, I often quench my thirst” really sounds like them. The singer sounds a bit like Matt Berry on the Snuffbox soundtrack. It’s very much post-Chic rock crossed with danceable indie such as Wild Beasts.

And of course Hockley Hustle isn’t just about the music. There are street performers from belly dancers to Brazilian martial arts demonstrations to stilt walkers and jugglers. There’s a carnival procession and live graffiti and on top of that there are several street food vendors. Plus it all raises money for charity! It was the first time that I’d ever been to the Hustle and I had a brilliant time.