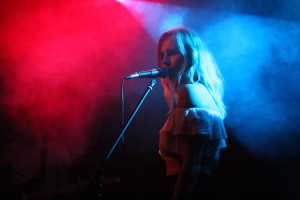 Last month Johnny Banks attended Dot to Dot festival around Nottingham city centre. He shares his thoughts about one of the highlights of Nottingham’s musical calendar.

It was the third day for the festival, with the previous two days held in Brighton and Manchester. Now in its twelfth year, this was actually my first time attending and I was pretty excited. I was armed with my own printed schedule of bands I wanted to see, a set list of times and venues for the whole day, notepads, pens, Belvita breakfast biscuits, and a photographer. 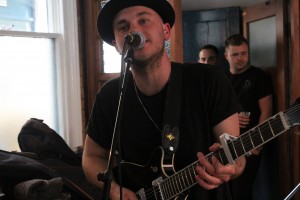 With the day kicking off at 11am, we decided to begin ours at 1.30pm to pick up the tickets from outside Rock City and then Head to Rough Trade to catch our first scheduled artist of the day, Ryan Farmer. One man and his acoustic, Ryan has a really strong, bluesy sound, a deep south feel to it, which was right up my alley to get the day started. There was already a decent crowd inside Rough Trade, and it didn’t dwindle by the time we left to head to our next venue.

Ryan Farmer @ Rough Trade
Next up it was off to see one of the bands I’d been looking forward to seeing the most that day. Whiskey Stain at The Old Angel. I’d started listening to them as part of my pre-festival research, just a few seconds of a few songs from a few artists to begin with, but I wasn’t able to turn these guys off. Strangely enough, not dissimilar to Ryan Farmer, but a lot heavier and riffier, they have a soulful sound to them. I was disappointed they didn’t play two of my favourite songs “New Cocaine” and “Twice the Same”, but you can’t win ‘em all, and they did promise me they would play it for me at their next set (I wasn’t able to go as it clashed with another band I’d already planned to go and see), which was very nice of them. I had a chat with them when they’d finished, and I have to say, they are two thoroughly nice chaps. I’ve not stopped listening to them since I first discovered them, and if you want to see them for yourselves, get down to Jam Café on July 14th. 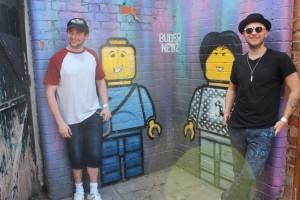 Rob and Luke of Whiskey Stain @ The old Angel
Heading out of the Hockley area and towards the other side of city centre, the next stop was Stealth to see Avante Black. A very serene and and chilled group. The lead singer, Ottilia Zimmerman Kjulsten (Swedish – I do love the Swedes) has a hypnotic stage presence, and I found myself closing my eyes and having a bit of a sway at some points (It wasn’t the beer, I actually managed to stay relatively sober throughout the day!). 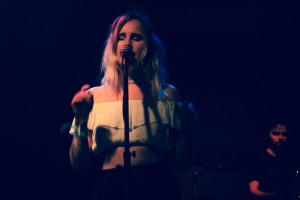 Ottilia of Avante Black @ Stealth
This is the part of the day where I was starting to identify my only real one criticism of the festival, for it was now a trek back across to Hockley to see the next band I had planned: You Want Fox at the Lofthouse. A Nottingham based female duo consisting of Natalie and Colette. Loud, sweary, energetic, feisty, and, well…hot. These ladies were a hit. We got there halfway through the set, and the place was packed. As I mentioned before, it was a hot day, so the heat created by all the dancing bodies really hit me when I walked in. The air was moist to say the least. Nobody cared though. There was a slight intermission where Natalie asked if anybody had a tissue for Colette who had been rocking so hard her hands were bleeding, but nobody did, so she rocked on without a hit of complaint. 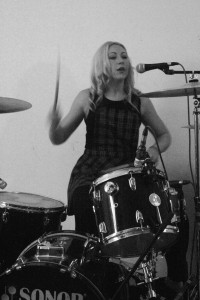 Natalie of You Want Fox @ Lofthouse
Now we head all the way back to Stealth, again. This time for the heavy, electric, death core sounding, Bone Cult. I met one of these guys when he served me at Filthy’s in Nottingham. I was really quite drunk, and made all the promises that I’d definitely go see him play and write lots about them, etc. When I get home after a night out sometimes, what I like to do is put on my headphones, discover new music, and decide that it’s the best thing I’ve ever heard. This is up there with some of the most surprisingly entertaining new music I’ve encountered. One of their tracks, Gabos, I listened to a few times in a row, and I was genuinely thrilled when they, as was promised to me, closed on it. I would say they’re a bit like what would happen if Prodigy had a love child with Chemical Brothers, and that lovechild liked neon masks and guitars that sound like they enjoy eating kittens. 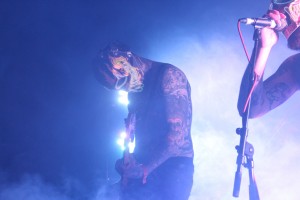 Bone Cult @ Stealth
In hindsight, maybe I should have planned more carefully the bands and venues I’d be off to see, because we were now facing our fifth trip across town to see the final band we had planned, Unknown Era at Baresca. If you don’t know Unknown Era, you should. I’ve been to see them a few times now and they never disappoint. A rag-tag bunch, with a strong politically charged compass. They are fun, and you cannot help but skank along. The reason there is no photo? Simply couldn’t get close enough due to the popularity of these guys! You’ll be able to catch them, amongst others, at Pond Life Festival in Eastwood June 24th
All in all, I had a lovely day. The weather held up for the best part, with only a brief showery spell, but that only served to cool a lot of people down, I think. As I said before, my only real issue is that I found it too spread out. In previous years it had been confined to the area around Rock City, Rescue Rooms, Stealth etc, but now it is dotted (I did that on purpose) all over the city, which as you can see, meant that a hell of a lot of walking was done on my part. However, this is also a lot to do with my planning, and the bands I wanted to go and see. There is no reason why you couldn’t stay in one area all day, or, if you really wanted to, the same bar. I’ll go again next year if I’m able. I’d even do all the walking again.