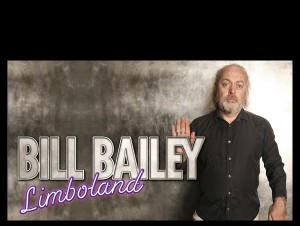 Limboland for Bill Bailey is post referendum Britian, one could hardly argue, however I did feel uncomfortable with his onslaught on those who voted leave. From looking around me, some in the audience were not too enthused with the political start to the show either.

All things considered though Bill was ‘not too bad,’in fact he was on top form and appeared to be having a blast in Limboland, which he brought to Nottingham’s Royal Concert Hall. The show was selection box of treats, musical wizardry, poetry, slapstick, anecdotes and more, all done with comic genius.

The last time some of the audience would have seen Bill may have been the time before last that he visited Nottingham at the arena, so fans were delighted to see him at this relative intimate venue, it was an effervescent experience, seeing Bill fizz with the audience reaction.

Highlights from the show were for me, the everyday songs sang Heavy Metal style, and the audience participation in embellishing a one off musical composition.

On the day we lost perhaps the best female comedienne of my generation, Caroline Aherne, it was perhaps with bitter sweetness, the right thing to do, to go out and have a brilliant laugh.