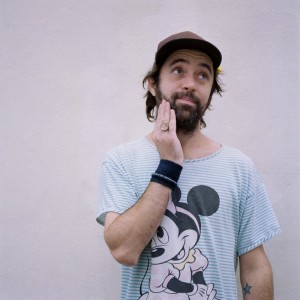 Beans On Toast is on the final leg of his, mostly sold out, Inevitable Train Wreck tour.

I went to see him perform at a packed out Bodega, and as per, the night was a blast. He brings with him a likeability that really connects with the crowd, his folk rock style of singing feels almost like he’s having a chit chat with you, and that combination makes for a really warm and friendly atmosphere; the audience singing along in unison to much loved songs such as A Whole Lot of Loving and I’m Home When You Hold Me, and songs from his new album, The Inevitable Train Wreck, World Gone Crazy, brought everyone together.

As he’s been doing an Album every year for the past ten years, the songs are always very up to date with current social issues. I think it’s fair to say that Beans has a strong moral, and ethical, compass, and that also reflects in his songs. However, he’s very upbeat and seemingly carefree, almost Monty Python’s “Always Look on the Bright Side of Life”, which makes realising society is on it’s way down the toilet enjoyable.

Opening for Beans was Tensheds. With a bluesy fee, honky tonky-esque ivory ticklingl, and a gravelly singing voice, he really fit the mood of the night. I would liken him to Nottingham’s very own 94Gunships. He would also later join Beans on stage alongside Kitty and Lewis (two thirds of Kitty, Daisy, and Lewis) who helped bring The Inevitable Trainwreck to life. A talented band within their own right.

One final little thing that has to be mentioned; Beans has very close ties in Nottingham and has collaborated with Mocky-D (Nottingham’s best vegan burger) to create his very own burger where 10% of profits go to Nottingham Wildlife Trust. This will be available from next week on Clinton StreetEast, City Centre