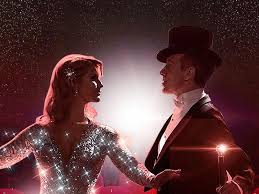 23 years, 12 tours, 11 frocks a show and 100,000 Rhinestones: Anton and Erin seem to have perfected the magical formula that has the audience eating out of their perfectly placed hands.
It’s not the first time I’ve seen the duo at The Royal Concert Hall, I was trying to work out just how many times it’s been, six I reckon.  So what’s changed and just what is it that keeps the audience going back for more of the Strictly Golden couple’s live show.
The first major change is that Anton finally made it to the final of Strictly last year of course  (cue huge applause) You’d be living under a rock if you didn’t know that poor Anton usually gets paired with the least able celebrity on the show, which has largely been the butt of many jokes over the years.  No chuck and slide this year though for the entertainer who has become as famous for just being Anton as he is for his dancing.  The younger audience may not even remember Erin’s days on the show, having left in 2012 to start to family, but has continued to work with Anton off screen since.  Erin carries an air of elegance which is sometimes missing from the hit show nowadays but still has the body, looks and style to compete with any of todays dancers.
23 years is a long time to work with the same person, never mind dance with them, but like a finally tuned instrument, they have their art down to a tee.  Not a ‘real-life’ couple like some of the dancers, but the chemistry between the ballroom champions is still perfect.  When Erin can get a word in they bounce off each other verbally and move together when dancing in perfect sync.  It is this magic formula that sees audiences returning year after year.  It’s safe entertainment and the duo deliver exactly what the audience have come to expect; cheeky banter, beautiful choreography and tales of Strictly.
The age of the audience is mixed and we learn from the now expected Q & A in the second half that they range from 3 – into their 90’s, although it feels aimed at the older end of audience.  The show sits perfectly with a chilled Sunday afternoon, the music slow to mid tempo, the outfits classy rather than trashy, the dances slower and less in your face  than say what you might expect from the likes of Kevin Clifton and Co, but it appeals to all.  I’m certainly not criticising the chosen dances, this coming from someone who was out of breath after climbing 3 flights of stairs to her seat.
The format of the shows has stayed the same over the years, though the theme changes.  Supported by 6 dancers, this year it is Dance Those Magical Movies, lending itself to some beautiful performances and outfits. During the show the cast pay homage to Laurel and Hardy, Marilyn Monroe, James Bond, The Greatest Showman and Audrey Hepburn to name a few, all backed by a 23 piece orchestra led by Richard Balcombe.  Lance Ellington returns to provide vocals, this year alongside Laura Emmit, Both great vocalists but at times I felt the songs outnumbered the dance routines, it’s probably not the case, but when you’ve gone to see a dance show, well, you want dance.  Just bringing dancers on to do the Dirty Dancing lift during Time of My Life seemed a bit odd, it would have been nice to see the whole routine performed rather than just the pair stood singing for the majority of the time.  That’s really my only criticism, which can’t be bad.
Same time next year? OK then.
By Tanya Louise
Editor: NottinghamLIVE
Visit My Blog
Visit My YouTube Channel
Find Me On:
Twitter Instagram and Facebook