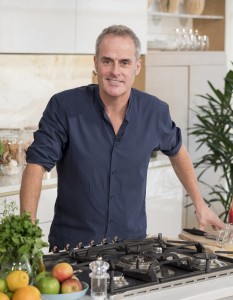 Held at Clumber Park, Worksop, on Saturday 18 and Sunday 19 September 2021, friend of the festival Phil Vickery will appear on Saturday. Phil is best known as the chef on ITV’s This Morning having appeared for over 16 years.

Phil’s career started as a Commis Chef at the Burlington Hotel on Folkestone seafront where he worked his way up the kitchen ranks. On his journey he has taken in the very smart Michael’s Nook hotel in Grasmere, Cumbria, the Michelin starred Gravetye Manor in East Grinstead, and Ian McAndrew’s Michelin starred restaurant ‘74’ as Sous Chef. He then moved to the West Country and to The Castle hotel in Taunton as head chef where he won an array of awards including a Michelin star.

His TV career began after filling in for Keith Floyd on the Breakfast Programme, and over the past 20 years, he has appeared on the BBC Holiday Programme, Ready Steady Cook, Proof of The Pudding, his own series Phil Vickery’s Pudding Club and of course This Morning, presenting live and pre-recorded cookery items.

Between his TV work and writing – Phil’s written 20 books, including his most recent, Save Money – Good Diet but it is not a diet book: it lets you cook and enjoy food with a nod to being healthier and more prudent.

Phil appears alongside TV Chef Joe Hurd and the ‘Dirty Vegan’ Matt Pritchard who will also be demonstrating their cooking techniques as well as meeting festivalgoers. 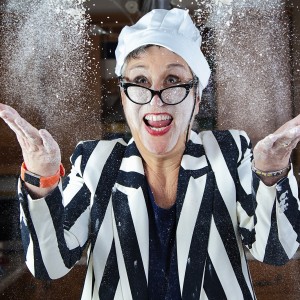 On Sunday, Great British Bake Off’s Karen Wright will be bringing her larger-than-life baking skills to the cookery theatre. Leaving at the halfway point of the 2018 season, Karen gained some non-baking related notoriety due to munching her way through a bag of crisps during the first episode.

Karen has always enjoyed baking and cooking but took an interest in cake decorating in 2015 and taught herself techniques using books and the internet. In preparation for the Bake Off tent, Karen did a crash course bread making, savouries and pastries.

Her interest is cooking and baking using minimal equipment and developing recipes suitable for camping holidays, as she has spent all her life enjoying the camping lifestyle because of her work. 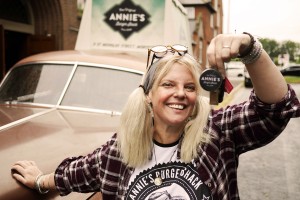 Moving to Nottingham from New England, USA, in 1994, Annie soon realised that the East Midlands was missing an authentic American burger. The first burger ‘shack’ launched in 2009 and has gone from strength to strength now hosted in a Grade 2 listed Lace factory in the historic Nottingham Lace Market with a colossal menu of 34 burgers with vegan, veggie, or meaty options.

Annie’s Burger Shack in Friary Street, Derby was then opened in December 2018. Not only popular with her burgers her extensive authentic American breakfast menu is not to be missed!

The Festival of Food and Drink brings together around 150 artisan food and drink producers from the local area and beyond. Celebrity chefs host demonstrations and autograph signings while the School of Artisan Food offers workshops for both adults and children.

The biggest event of its kind in the region, the festival vibe is enhanced by live music throughout the weekend, with the stage area surrounded by Street Food vendors, cocktail bars, breweries and Pop-Up Cafes.

Ticket prices start from just £10 in advance for the Festival of Food and Drink with free admission to see the cookery demonstrations by the guest chefs on the day as well as into Clumber Park included (usually £5 per adult). VIP and family tickets also available. Children aged five years and under are admitted free with a paying adult. For more info, visit www.festivaloffoodanddrink.com