What a goal. When I decided I was going to write a column about the Notts County Ladies football team I had no idea that I would be writing about a goal that has become an online sensation, viewed around the world and featuring on the likes of Fox News Sport and USA Today in the States.

The goal, it has to be said, was pretty special, one of the best worked and cheekiest free-kicks I recall ever seeing in football. When Laura Bassett lined up to take the free-kick just outside the Arsenal area most of us, the Gunners defence included, expected the defender to try a shot, instead she stopped up her run up and then appeared to argue with fellow County player Alex Greenwood, suddenly the ball was played to striker Ellen White who curled a shot into the net – via a slight deflection. It was pretty damn impressive stuff. We doubt you’ll see a better worked free-kick in any match this season. 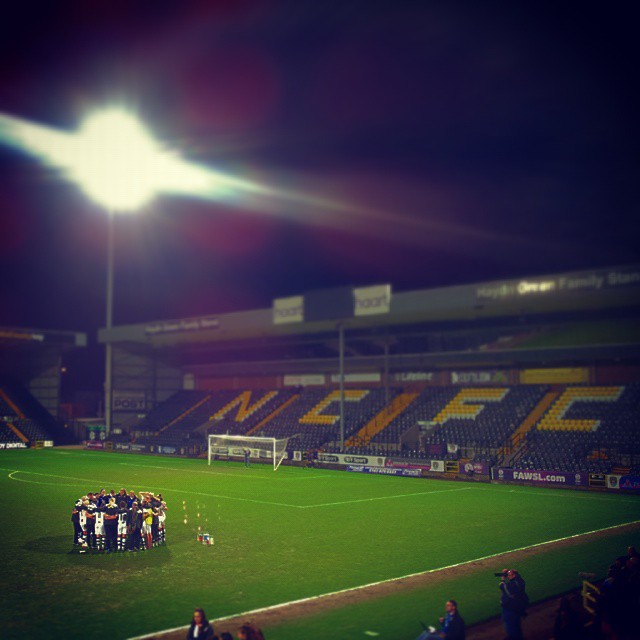 Unfortunately the goal wasn’t enough to secure the Lady Pies first League win of the season, a late strike from Chioma Ubogaga earning the visitors a point that, in all honesty, they didn’t deserve. The disappointment was compounded with the fact that County scorer White missed from the spot just half a minute after opening the scoring.

Thursday nights draw means that the Pies have taken just a single point from their opening WSL games – both of which have taken place at Meadow Lane, the side going down 2-1 to Chelsea the previous Sunday. Unlike County the Blues making no mistake when offered the chance to score from the spot.

Still it’s early days and the performances in both matches leave much belief that County have the talent to be up there this season. White, in particular, looking extremely threatening and like a player desperate to make up for the twelve months she missed thanks to a serious knee injury.

While the league start might not have gone as well as one would hoped the Pies started their season with a convincing win in the Women’s FA Cup, brushing aside Tottenham Hotspur 4-0 in an impressive performance at Meadow Lane. That win saw County earn a quarter final tie against Aston Villa. What is more, for the first time ever, the Women’s FA Cup final will take place at Wembley this year. Notts Ladies therefore just two games away from an appearance at the famous stadium – doing so would make them the first County team to play at the stadium since it was rebuilt. Here is hoping we’ll all be making the trip down the M1 this August.

So all in all perhaps not the start we were all hoping for, in the WSL at least, but there is definitely a feeling that Notts could be going places this season, some fantastic new signings have strengthened an already impressive side while the return of Ellen White adds to an exciting attack that already includes last years WSL top score Jess Clarke.

Next up the Lady Pies welcome Villa to Meadow Lane for their FA Cup quarter final tie before the first away game of the season sees a short trip across to Birmingham City who, like the Pies, have picked up a single league point so far this season.

If you haven’t yet checked out a County Ladies match we suggest getting down there, the atmosphere is great, with Notts drawing impressive crowds with over 1,000 fans at both of this weeks game, while we have a pretty damn great team.

Just don’t expect to see another free-kick like the one we witnessed this past week, with even the goalscorer herself, Ellen White, saying after the match “”…now we can never do it again, which is a little annoying.”

COME ON YOU LADY PIES.