After a well received first issue we moved on to Issue two in November 2009, with the page count growing four pages, from 30 to 34 and a couple of great regular contributors signing up to write for the publication – Will Robinson joined us to talk all things I’m Not From London, while Steph Kirkup at top Nottingham venue The Maze would be producing a regular column on what was coming up at the Mansfield Road bar. 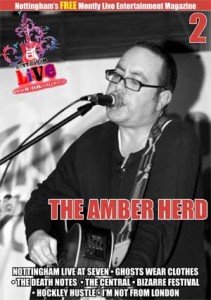