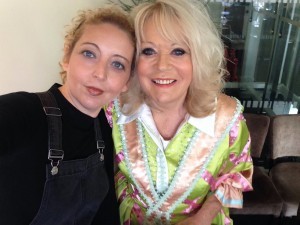 From memories of Nottingham to family and childbirth, I was lucky enough to chat with the much-loved actress, TV star, ex-Loose Women presenter, and Nottingham native, Sherrie Hewson at the launch of this years pantomime at the Theatre Royal in Nottingham.  As lovely in person, as you would imagine, Sherrie leads the cast of this year’s spectacular panto as Mrs Potty. Her roles in Coronation Street, Emmerdale, Crossroads, and the legendary Carry On films have all led to Sherrie becoming one of Britain’s best-loved and most popular faces on television. In the last decade, Sherrie made a niche for herself as the comedy cornerstone on Loose Women and ITV’s popular hit Benidorm as the legendary Joyce Temple-Savage. Beauty and the Beast marks Sherrie’s return to pantomime with Qdos Entertainment having last headlined for them in Hull New Theatre’s production of Aladdin in 2014.

Welcome home because you’re actually from Nottingham, aren’t you?
Yes, it’s really strange, you know when I look out there it’s like, everything is so familiar, every building is so familiar, you know, I mean I know every single building.
There are some beautiful old buildings in Nottingham isn’t there. It’s just that a lot of them, some of its gone. I mourn for that but you can’t because that’s the same in every city, they knock things down, but this theatre, my mum would have been so thrilled that I was here, and I’ve got family still here in Nottingham, so I will try and see them all but just to walk around Nottingham is extraordinary for me, you know there’s the Palais De Dance,  which is now something else, but the buildings there. The frontage is still the same. My brother was a DJ there, Brett Hutchinson, my real name is Hutchinson, but I’m going back since year dot so, probably 60’s I would imagine. So every building – its just strange when you come back to your hometown, and all the years I was here.  I was at Valley School, and there’s a theatre in Hockley called The Nottingham Arts Theatre and I started there with Sue Pollard when we were about 7 and then on the next street, I think its called Broad Street, I went to ballet there with Janine Davinski who Plays Jacqueline in Benidorm, she’s from Nottingham, Every street has another meaning to me,  I trained here with Torvill and Dean as a skater in the old ice rink, not the one that’s there now. They’re about seven years younger than me, but we all trained at the same time. Of course, I see them now, they don’t remember but I only remember because we skated at the same time, we didn’t remember being friends but that’s a lovely memory for me to have. Everything has another memory for me. Every street I’ll be saying ‘Oh my God!’

How long did you live in Nottingham for?

I was born in Burton Joyce, and I lived in Burton Joyce. I left Nottingham to go to drama school when I was 18. I went to London and I never really came back apart from to see my Mum, she was here. She left Burton Joyce when I went to drama school and she ended up in Beeston where all my family then ended up for some reason, I don’t quite know why everybody ended up there but they did. I’ve been back to Burton Joyce and the house which we lived in. It’s a magnificent house and we had horses. I’ve ridden all my life, but the sad thing about the house is, I think a magazine took me back, the house itself is still there but they’d taken out all the features and I couldn’t hide my shock, I mean fireplaces. This was about 10 years ago. It was a young couple and I wasn’t quite sure why they’d done it, so it kind of shocked me a bit, and I thought, maybe you should never go back but as for Nottingham itself, I don’t have bad memories here, I went to a little school, Before  we went to Burton Joyce, we lived in Beeston and I think it’s called Dagfa now. It’s a little school, it wasn’t called that, and I went back to it, it’s an old house, it’s so beautiful. I can’t remember what it was called when I went there, but it was a beautiful beautiful period house, little private school and so that has wonderful memories the whole thing is is weird, when every step is another memory. Every place is another place you used to go. 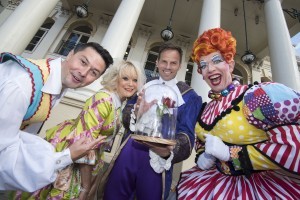 Is it your first panto in Nottingham?

Yes, and I wasn’t going to do a Pantomime this year, I was going to take a year out, I thought no, I’m not doing one this year. I’m going to be at home with my children and grandchildren and not do one and then Jonathan Kylie rang me and said ‘Ok, Nottingham’, I said ‘Oh Jonathan, on the year I was going to take out, but there was no way I could refuse Nottingham.
Will you spend Christmas day in Nottingham?
No, because my daughter and grand children live up near Manchester way, which is about an hour and a half drive, so Christmas Eve I’ll go, have Christmas day with them and then I’ll come back Boxing Day morning because I can’t be without them, I live for them, in fact at one stage, when my husband went, Keeley – my daughter came here and we lived in Wollaton but then we went to Llandudno where my brother lives because we had a very bad time, a very bad break up, really terrible, terrible and I had a break down, which I didn’t realise and lost all my hair. I look back now and I wish I’d have done it sooner. I procrastinated if only I’d been brave and gone. I’d have met somebody else, I would have had more children. I will go to my grave with that terrible regret, that I never gave my daughter a brother or a sister. My daughter always says to me ‘But Mum, then I would have had to have shared’ and also, to be truthful, my daughter has had everything, she’s had private schooling, and I couldn’t have done it for two. I could just do it for one and I’m now doing it for my grandchildren, but I still feel sad that I didn’t meet somebody else because I would have loved 3 or 4 but to be honest with you I had such a terrible birth, 48 hours and it scared me rigid. I thought I don’t know if I can go through this pain again and you know they say you can forget? I never forgot. I screamed the hospital down.

Listen to the interview here: https://www.youtube.com/watch?v=j7iY97giVww

For accommodation nearby visit: https://www.booking.com