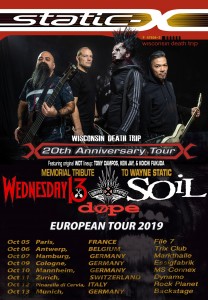 n forces with Static-X, Wednesday 13, and Dope on a UK and European tour this fall.

As a special tribute to the late Wayne Static, Static-x has reformed with all the original “Wisconsin Death Trip” members to pay homage to Wayne and his legacy. Vocalist Xer0 will be handling vocal duties while staying true to the iconic Wayne Static imagery in the form of a masked and spiked up hair. The stage show and performance has been super well received and is currently selling out venues across the United States.

Having been long time friends with the members of Static-X and having toured together on my occasions, the members of SOiL wanted to pay their own tribute as part of the tour. This is what they had to say:

“In order to pay our own special tribute to our friend Wayne Static on the upcoming UK and European Static-X memorial tour, we have decided to play the SOiL song “Give it up” that was recorded with a bunch of Wayne’s vocals on it. Naturally these tracks are pre-recorded and will be integrated into our live set.  Wayne sang many parts in the song and it was a very special recording session. We were able to get the vocal tracks isolated from the recording masters and thought this will be SOiL’s way to pay tribute to an amazing musician and friend. The song will only be played on these dates, so if you miss it there will not be another chance to witness it. We are looking forward to seeing you all on this very special tour!” -Ryan, Tim, Adam