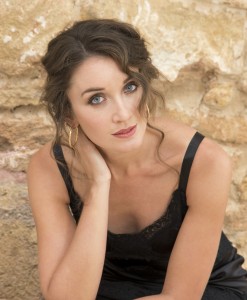 Rising classical singer and lyricist Carly Paoli has been shortlisted in the first ever Sound of Classical poll, with the winner to be revealed at the Classic BRIT Awards on June 13th.

The winner will collect the award in person during the Classic BRIT Awards ceremony at the Royal Albert Hall in London, to be broadcast on ITV. Speaking about the news Carly said “I had to pinch myself when I found out that I was nominated for a Brit Award and I’ve been thanking the Lord ever since I received this incredible and completely joyous news.

Since I was a little girl, I dreamt about singing and sharing my music with an audience. Now that my dreams have come true, I hope other young people can be inspired to follow theirs. I am so excited, so grateful and so thrilled by this prestigious nomination.”

Signed to the independent London-based record company ABIAH, Carly released her debut album Singing My Dreams in 2017. The record charted at No. 2 on the UK’s Official Classical Albums chart, while earning 5 star reviews. Carly recently performed a headline concert at London’s Cadogan Hall leading Classic FM’s David Mellor to write a glowing 4 star review in the Mail on Sunday under the headline ‘Nobody does it better’.

From Mansfield, Carly studied at Tring Park and The Royal Northern College of Music and has worked with Jose Carreras, Andrea Bocelli and David Foster. She has performed alongside stars including Aerosmith lead singer Steven Tyler and Oscar-winning actress and Grammy-winning singer Jennifer Hudson and was invited to perform for the Prince of Wales and the Pope.

Carly recently signed a publishing deal with Sony ATV. Her songwriting credits on Singing My Dreams include co-writes with Ennio and Andrea Morricone and James Horner having written English lyrics for Se Tu Fossi (Cinema Paradiso) and the theme from Legends of the Fall which now bears the title Memory of You.