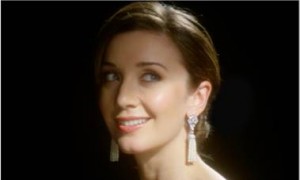 The event, at which Carly will perform, will be held on May 27th 2017 in Castello Angioino di Gallipoli in Puglia. Carly has recently performed at many high profile events in Italy including at the Roman Forum and Terme di Caracalla, and on national TV shows Zecchino D’Oro and TV2000.

“It’s a huge honour for me to be nominated for this prestigious award. Puglia is as much my home as the UK, my family are there, it’s where I spent all my free time growing up and gained so much performance experience. It’s a lovely feeling to have been recognised there for my dedication to music and also love of the region” said Carly on hearing the news of her nomination.

On June 30th Carly will release her highly-anticipated debut album ‘Singing My Dreams’. Featuring a rare duet with José Carreras (the iconic En Aranjuez Con Tu Amor) the album is an enchanting collection of classical and classic pieces, as well as original compositions – some featuring lyrics by Carly herself.

‘Singing My Dreams’ is the personal story of a little girl who fell in love with the MGM musicals; a teenager who sang in the piazzas of Puglia; a student who studied her craft at Tring Park and The Royal Northern College of Music; a rising international star who has sung with -and is lauded by- luminaries including Andrea Bocelli, Elaine Paige, David Foster and Carreras.

“Carly is a wonderful person to work with. I admire her voice, artistry and her charisma. It’s a pleasure for me to sing with her.” – José Carreras

In between recording her album Carly has performed on international stages including The Forum and Terme di Caracalla in Rome, as well as in Monaco, Malaysia, Florence, New York (Carnegie Hall) and London (O2 Arena), and at Windsor Castle and St James Palace for HRH the Prince Of Wales. Also in May, Carly will perform in ‘La Messa Arcaica’ at the ‘Teatro Massimo di Bellini’ in Catania, Sicily alongside the legendary Franco Battiato.

WATCH: Carly at the O2 Arena, London, with Andrea Bocceli