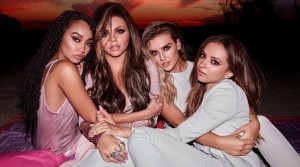 Last month, the world’s biggest girl group Little Mix announced a brand new arena tour for October and November 2017. A date of Wednesday 15 November 2017 was confirmed for the Motorpoint Arena Nottingham. This date has almost sold out.

Due to customer demand, a second date, Tuesday 14 November 2017, has just been added and tickets go on sale at 9am this Friday (4 November).

Since 2011 Perrie Edwards, Jesy Nelson, Leigh-Anne Pinnock and Jade Thirlwall have established themselves as one of British pop’s brightest acts. With their new album ‘Glory Days’, led by the glorious and cheeky lead single ‘Shout Out To My Ex’, this is only going to make this fact even more glaringly obvious.

Signature hits including ‘Move’, ‘Wings’ and ‘Black Magic’ – the latter becoming their third UK chart-topper, stubbornly spending three weeks at the top last summer – have helped the Number One-selling girlband score over one billion YouTube and Vevo views worldwide, alongside massive tours of the UK, Australia, Japan and the US – where their debut album smashed a record the Spice Girls held for almost two decades.

In many ways, however, it was their third album, 2015’s ‘Get Weird’, that was the real turning point. Released in the hugely competitive month of November it flew into the chart at Number 2, spent the rest of that year in the Top Ten and by August 2016 had become the biggest-selling album of their careers. Even now it’s currently nestled happily in the Top Ten selling albums of 2016, outselling the likes of One Direction, Sia and Rihanna. Rather than seeing their careers plateau or start to diminish with each album, Little Mix are revelling in bucking the trends of the more typical pop acts.

The success also meant they could head out on another arena tour, this time playing an incredible 60 shows across Europe, Australia and Asia, and selling over 500k tickets.

Pop acts like Little Mix don’t come along that often. Growing better and bolder with each new album, things are about to go properly interstellar.

Tickets for the second date go on sale at 9am on Friday 4 November priced at £28, £39.20 and £50.40 (includes admin fee). Please note, audiences may choose to stand and dance at this event. If customers have any concerns that this may obstruct their view or the view of a member of their party, we advise them to book tickets in the tiered blocks. Standing on seats is strictly prohibited.

Tickets can be booked online at https://www.motorpointarenanottingham.com/online/littlemix or via 0843 373 3000 or in person at the Motorpoint Arena Box Office, Bolero Square, The Lace Market, Nottingham, NG1 1LA.