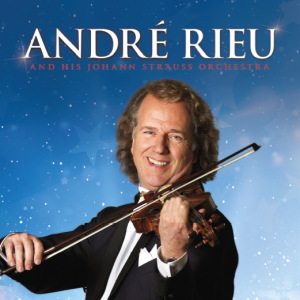 The career of Dutch violin superstar André Rieu spans more than 30 years – he is not only a first-class entertainer, he is the “King of Waltz”.
And he sure knows how to stage a grand show including romantic moments and witty twists.  His orchestral tours draw more than 600,000 people per year, meaning that the charismatic entertainer outsells superstars like Bruno Mars, AC/DC and Rihanna in the Billboard’s Top 10. He has sold a massive 40 million CDs and DVDs and notched 30 Nr. 1 chart positions. André Rieu ends his annual world tour traditionally with a UK and Ireland Arena Tour that leads his 2018 into nine cities coming to the Motorpoint Arena Nottingham Saturday 15 December 2018. He’ll bring romance and magic to every fan during the cozy pre-Christmas season and will play wonderful Christmas carols alongside his entertaining programme.
Waltzes, film scores, folk songs and musicals
On stage André’s incredible musical prowess, passion and charisma make for a magical spectacle. His romantic and fun shows are the only ones where people regularly jump to their feet and dance in the aisles. It’s not uncommon to see devoted fans laughing, weeping, clapping, dancing and embracing when they listen to the orchestra and André’s precious Stradivarius violin from 1732; his shows are a perfect mix of thrilling, romantic, festive and emotional melodies combined with surprises, balloons, beautiful soloists and of course André’s great sense of humour.
“Spending the Pre-Christmas season in the UK and Ireland with such fantastic fans makes me feel very grateful and pleased every year” says André Rieu. “People write to me, telling me that it takes them two weeks to get back to normal after one of our concerts. It is simply fantastic to feel this energy and joy every evening.”
André and his 60-piece Johann Strauss Orchestra (the largest private orchestra in the world) created a global revival in waltz music, staging spectacular extravaganzas which are second to none.  André’s concerts are a feast not only for the ears but also the eyes! Having received over 500 Platinum Awards, three Classical Brit Awards for “Album of the Year” and billions of Youtube views, André is one of the biggest touring artists in the world.
World Arena Tour 2018 and Private Life
Known to millions around the world as the “King of the Waltz” André is also a true “King of Romance”. He has been married for over 40 years and lives with his wife Marjorie in a historic castle, built in 1452 in his hometown of Maastricht/Netherlands. The couple have two sons and five grandchildren. André’s World Arena Tour 2018 will hit Europe, Mexico, Israel, the USA and Canada, Argentina and Australia before returning to the UK and Ireland. Don’t miss your chance to see André Rieu LIVE this December!
Tickets go on sale at 9am on Friday 13 April priced at £51.30, £73.70, £96.10, £111.78 and £134.18 (prices are listed with venue fees included). There is a maximum of six tickets per person.
Tickets can be purchased online at  https://www.motorpointarenanottingham.com/online/andre-rieu via 0843 373 3000 or in person at the Motorpoint Arena Box Office, Bolero Square, The Lace Market, Nottingham, NG1 1LA.