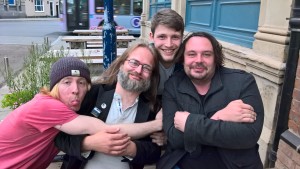 Back in October, Writer, performer and filmmaker, Steve Oliver, hosted a stage at the Hockley Hustle for the final time before taking his foot off the pedal as far as his work within the Nottingham music scene and moves on to other projects.
His chosen headline band, The Breakfast Club, gave him a heartfelt send off and then foolishly invited him on to the stage to join them for their final song, ‘Top Shop’.
As a final goodbye to the Hustle, they have released ‘Top Shop’ as a single with all of the proceeds being handed to the main organisers of the Hustle to be distributed among the festival’s charities. The download price is set at 50p but the option is there to pay more, especially as it is nearly Christmas and it’s for a great cause.
The song is available to download here https://steveoliver.bandcamp.com/track/the-breakfast-club-featuring-steve-oliver-top-shop-live-at-hockley-hustle-2018
The video is here https://www.youtube.com/watch?v=QKiEf1WPSWU