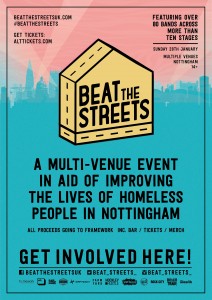 Donations are coming in thick and fast for Beat the Streets – the huge all day music festival fundraiser taking place next January – as the community comes together to tackle the growing homelessness crisis in Nottingham.

Within a few hours, the event’s JustGiving page had accepted more than £1,200 in donations from the participating music venues, in addition to the revenue raised from the hundreds of tickets sold to date. Organisers hope to raise tens of thousands of pounds for  Framework, the Nottinghamshire based charity dedicated to helping homeless people.

With rough sleeping in the city at an all time high, the Beat the Streets team is calling on the community of Nottingham to get behind the event. They are on the lookout for more collaborators from the worlds of music, art & design, food, and business, as well as urging people to buy a ticket with all proceeds being donated to the charity.

Jason Marriott, Manager of Framework’s Street Outreach Team said: “We are experiencing record numbers of rough sleeping across the country. In Nottingham we have recently found 49 people sleeping out on one night, which stands at the highest number since our count began. Despite a great effort between charities and the City Council to assist people who are street homeless the problem is growing. Without more preventative help in place and a boost of intensive support when making a transition off the streets, those who end up rough sleeping have a reduced chance of making successful journeys away from them. At Framework we work hard to provide this help for people in danger or rough sleeping and experiencing it but the winter is a particular time for concern as the number of people living outside increases, our resources are stretched and risk of death increases due to severe weather conditions.”

Local music promoter Will Robinson, I’m Not From London, explained why he’s putting his weight behind Beat the Streets. “There are more people than ever teetering on the edge of homelessness. I’m a music lover and I also like to help out community causes and this is a great way of raising money for people who really need it and at the same time giving local bands a big stage to showcase their music. Beat the Streets will be an extremely enjoyable way to kick those January blues away and spread the message of love and support for people who don’t have the luxury and security of a roof over their head.“

Sam Allison, Rough Trade, decided to get involved after seeing firsthand the homelessness crisis getting worse with more rough sleepers out on the streets of Hockley particularly at night time.

“It’s not nice seeing people in that way and everything you can do to help might make a difference. As part of the thriving music community in Nottingham, we want to lead the charge to help make things better for these people. I’m excited to see how many people in Nottingham come together to help an important goal for the city.”

No stranger to staging music charity events himself, Tommy Farmyard, the organiser behind Hockley Hustle, is the third collaborator who will be supporting the festival.

“It would be great if with Beat the Streets and other events, we can raise money year on year to eradicate rough sleeping in Nottingham and beyond. I’m looking forward to collaborating with fellow promoters to showcase some brilliant Nottingham music.”

Also on board is Stories of the Streets, the photographic project led by University of Nottingham students which conveys images of homelessness from the perspective of people in Nottingham experiencing it firsthand. The photographs and stories behind them will be on display during Beat the Streets.

Ben Rawson, Stories of the Streets, said: “The homelessness crisis in Nottingham is terrible and set to get worse and it’s getting colder. It’s a crisis we should all be empathetic towards too; with the reality than anyone can find themselves homeless.”

The Beat the Streets team are working flat out to pull together an amazing line up of artists both from Nottingham and further afield with the first announcement expected to be made very soon.

Framework Fundraising Manager Chris Senior said: “The wholehearted commitment of the Beat the Streets team to make a substantial difference to the lives of the most vulnerable homeless people in Nottingham is inspiring.
“We hope people will be equally inspired to turn out in large numbers to support this magnificent initiative: they can be sure of a great day and of doing good at the same time.
“Beat the Streets will be an epic event which raises substantial funds and awareness to address one of the most pressing social issues of our time.  There is no doubt it will make a tangible difference to the lives of people living on Nottingham’s streets and we at Framework are most grateful for this amazing support.”

The money raised from Beat the Streets will go towards improving the effectiveness of Framework’s Street Outreach Team. This includes putting qualified social workers in place to start assessments on the streets, towards emergency accommodation to protect people in below zero conditions and towards resettlement workers who enable smooth transitions from the street to a tenancy.

Tickets are on sale from Gigantic (www.gigantic.com) and alt.tickets (www.alttickets.com) at a recommended price of £10 (minimum £5) with the option to donate more. One ticket will allow access for 14+ to all participating venues.

Additional donations can be made at JustGiving www.justgiving.com/fundraising/beatthestreetsuk