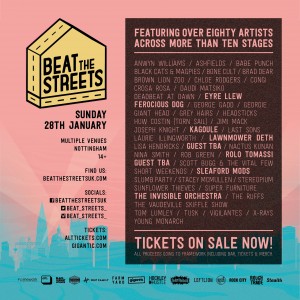 Beat the Streets – the all-day music festival fundraiser in aid of the homeless – has added 40 new names to a stellar line up of artists to come out of the city’s music scene in recent years.

Unknown Era, Shelter Point, Latmun and Lone are just some of the new names joining the huge line up taking place later this month on January 28th. They will join the likes of Sleaford Mods, Ferocious Dog, The Invisible Orchestra, Lawnmower Deth, Rolo Tomassi, Kagoule, Eyre Llew and many more to raise vital funds to support homeless people in need.

There will also be a range of other attractions taking place at the Black Cherry Lounge on the day, such as a stall selling limited edition Beat The Streets merchandise (with all proceeds going to Framework), as well as a range of stalls by other local charities ready to inform gig-goers what they do. A very special charity raffle will also take place there, where a wide variety of prizes can be won, such as signed goods from the likes of Billy Bragg and London Grammar, as well as festival tickets and a range of vouchers and band merchandise. You will also be able to get your hair cut on the day by Deck Chair Barbers, who will be donating all money raised to Framework.

Framework Fundraising Manager Chris Senior said: “Nottingham, like other cities in the UK, has a significant and growing homelessness problem. Beat the Streets is an unprecedented demonstration of public concern to help tackle this issue. Framework is incredibly grateful to everyone at DHP Family, their collaborators, the many outstanding musicians who are generously giving their services, and to the many suppliers who will be making gifts in kind.

We are delighted, but not in the least surprised, to hear that the public share our excitement about Beat the Streets and are booking in large numbers. We are fortunate to live in a city where members of the public care so deeply about people in need. We cannot wait for Sunday”. For those interested in finding out more about Framework, there will be a range of case studies and informative videos playing on the screens at Rock City throughout the day.

All proceeds raised from ticket sales and merchandise will be donated to Framework, the Nottingham-based charity dedicated to supporting homeless and vulnerable people. Since Framework was formed in 2001, it has become one of the largest organisations of its type in the country, helping more than 11,000 each year. The charity operates services in Nottinghamshire, Lincolnshire, Derbyshire and Sheffield. Beat The Streets is being delivered by DHP Family in collaboration with local organisations and music groups including I’m Not from London; Farmyard Records; Hockley Hustle and Rough Trade.

The money raised from Beat the Streets will go towards improving the effectiveness of Framework’s Street Outreach Team. This includes putting qualified social workers in place to start assessments on the streets, towards emergency accommodation to protect people in below zero conditions and towards resettlement workers who enable smooth transitions from the street to a tenancy.Tickets are on sale from alt.tickets (www.alttickets.com) and Gigantic (www.gigantic.com) at a recommended price of £10 (minimum donation £5) with the option to donate more. One ticket will allow access for 14+ to all participating venues. Additional donations can be made at JustGiving www.justgiving.com/fundraising /beatthestreetsukFB: www.facebook.com/pg/beatthestr eetsUK/Instagram: www.instagram.com/Beat_Streets _ Twitter: www.twitter.com/beat_streets_