Meadowlands, a brand new festival taking place at Nottingham’s Victoria Embankment on the Jubilee Bank Holiday, has revealed a host of new acts for the event.

Previously announced headliner Gerry Cinnamon will be joined by a host of fantastic acts across multiple stages for the festival on Friday 3 June including indie mainstays The Kooks who will be appearing ahead of the release of their highly anticipated new studio album ’10 TRACKS TO ECHO IN THE DARK’.

THE MYSERINES are a force to be reckoned with, the young rockers, barely out of their teens, were picked out by Amazon Music UK as ‘Ones to Watch’ in 2022, while there debut album ‘Reeling’ hit the UK album chart top ten. The Liverpool band recently performed at Nottingham’s Rough Trade, and you can check out our review from that show here. 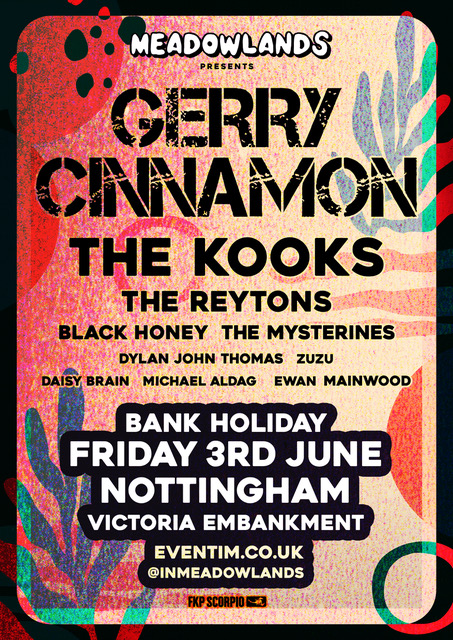 Also performing will be DYLAN JOHN THOMAS, named Scotland’s breakout start of 2022, singer, songwriter and TikTok star MICHAEL ALDAG, singer, songwriter, producer, director, actor and comic book illustrator ZUZU and Sheffield indie rising stars THE REYTONS are all also among those who will be appearing at the festival.

With more announcements set to follow Meadowlands is looking like being a fantastic way to celebrate the bonus bank holiday and is setting it sights on becoming one of the biggest festivals ever to take place in Nottingham. Tickets are currently available for £45 and can be purchased here