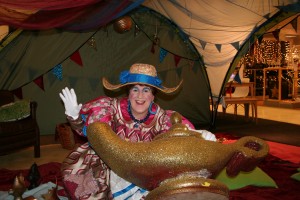 It’s not every day you get to snuggle into one of John Lewis’s finest recliners, particularly with one of Nottingham’s best-loved Pantomime Dames. NottinghamLIVE Editor TANYA RAYBOULD caught up with John Elkington for some thigh-slapping fun ahead of the launch of this year’s Nottingham Playhouse production of Aladdin.

“it’s a bit odd, doing semi serious interviews, dressed like this in John Lewis’s furniture department” quips John, who, when we meet is trying to convince two old dears that he’s actually sporting the chains Winter fashion range available in store.
Now having over 17 pantomimes under his garter, John never actually intended to be a Dame. “I liked playing the baddies, like Ebenezer. It just happened one year when Director, Kenneth Allan Taylor decided he needed a Dame up at Oldham and I thought, oh it’ll just be one year, but I quite enjoyed it. Then I came back here and a few years down the line I did ugly sister first, which is great because you’ve got somebody to bounce off,  but when it’s just you on your own it can be a bit daunting because you’re supposed to be funny” Taking tips from Kenneth Allan Taylor, he told him “Just make it your own”  There is a lot of ad-libbing, but that’s the stuff you can’t plan for and that’s where the danger lays as well, but providing you go with it you can fail or succeed on those things. It makes every night different, especially when you’re doing a long run as well. They’ve added an extra week this year, I think we’re doing about ninety shows. You can’t go on auto pilot because I’m listening all the time, as Dame I’ve got cart blanche, and if you’re  not tuned in you can miss it and the beauty of panto is that feedback and that response with the audience.
Having just finished a production of Brassed Off, Rehearsals start in two weeks time for this years pantomime,  when John will begin to learn his lines, although he has some music to learn before he starts. “I try to learn as much as I can to give me a heads up because I’m  a slow learner and as I’ve got older I’ve got slower, obviously I have to dance too and I’m a terrible dancer, the dancing takes me forever to learn” 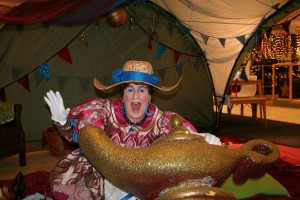 Audiences already return year after year to the Playhouse pantomime, so what can a first time visitor expect?
“It’s one of the few traditional pantos. Everything’s gone a bit celebrity, a bit reality and I wouldn’t knock that. There’s a place for it. A lot of theatres have also stopped doing panto in favour of what they term as a Christmas show, but that’s not panto, you know, The Snow Queen or A Christmas Carol and then there’s also a lot of them doing actor musician shows as well, rock n roll pantos, so this type of traditional family orientated, unknown actors show is becoming a rarity. So what they get is a traditional thigh slapping man dressed up as a woman, woman dressed up as a man, slapstick fun and frolics.  I’ve just found out I’ve got seven costume changes this year.” What happens when you’ve finished then? Does he get to keep them?  “Noooooo. This one isn’t mine. It’s one of Ken’s old ones. They try to sell everything as a job lot. It’s quite funny actually. A few years ago I was watching Fifteen to One and they were doing it on pantos, on Dames and two of them had my costumes on. The joy for me is that everything is made brand new each year. I’ve had two hours of fittings this morning, another four hours this afternoon. They make everything from the hats to the wigs to the tights. It’s great.
So finally, what would John say is the art of writing a good pantomime and has he ever tried?
“I’ve no idea, I have tried, I put pen to paper and gave up. People have said to me why don’t you write. What happens is I can get a story, anybody can get a story but it’s finding that format and that structure and even though I’ve done so many, a lot of the comedy comes out of what happens on the night so you can write the basics the A to B but for me it’s all about the interaction and so if I tried to write one I’d try to make it funny and I don’t think I could. Directors like Mike Leigh work by having a story but then they’ll spend six months rehearsing and they’ll do hundreds of improvisations and he’ll record all those improvisations he’ll write the script because he’ll take what he hears what he sees and what he finds and we just haven’t got six months to improvise panto. It is the sheer fun has kept me in it for so long. A big part of it is just the joy of each night”
Aladdin runs at the Playhouse from 25 November 2016 – 21 January 2017
To purchase tickets visit www.nottinghamplayhouse.co.uk, visit the box office or call 0115 9419419
Words and photographs by Tanya Raybould
Editor
@tanyalouiseray