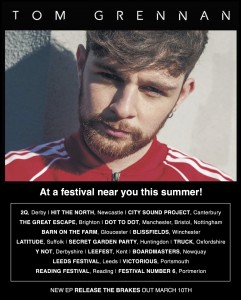 Q: You got a few festivals coming up this year including Dot To Dot festival which is a great festival, are you excited to be on the line up? Who do you want to see there?

Tom: Wicked man, I’m on the bill with loads of sick names, it’s unbelievable. I’ve never been Dot To Dot fefore it’s my first time. For one I love Nottingham.I want to see Honey Blood Yonaka I’m good friends with them. I may also see the headliners also Sundara Karma.
Q: You’re also on the Hyde Park festival with Kings of Leon how great is that?

Q: What inspired you to make the music you do?

Tom: I do what I’m feeling, day to day things, little stories that I’m told.

Q: What was it like to sell out your debut tour?

Tom: Amazing, I got to meet everyone after, my fans could tell I’m a normal geezer, like from where I’m from.

Q: Chase & Status well known for their electronic music, what was is like producing a single/video with them?

Tom: I got a call up to write a song with them it was crazy, and we’ve become mates and helped me out starting my career.

Q: Who else would you like to collaborate with?

Q: Your Autumn Tour is coming up, starting with Nottingham at the Rescue Rooms, ending with Birmingham 02 Institute in October, what reception from your fans are you getting about this, are they all excited also?

Tom: Reception has been good, people are buzzing that I’m coming back to different cities, and I’m buzzing I’m going back to the cities as well.
I don’t know how many tickets have been sold but I’m very much looking forward to it, with bigger venues

Q: After the festivals and tours what’s next that fans can expect from you?

Tom: I’m playing Coco in London in September, new music is coming in June, and I’ve got to write and create a album.

Tom: Thank You very much for talking to me today and thank you for the support I really appreciate it.