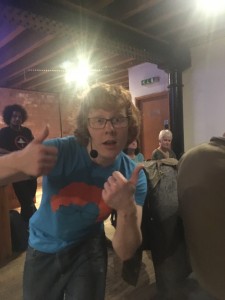 GAV SQUIRES chats with Dave Alnwinck about  magic, mind reading and being the leader of his own cult…

G: You were here last year with your show “The Cult of Dave”, tell us about your new one, “Mind Wizard”
D: Mind Wizard was put together after The Cult in response to the questions I was asked about how I started performing.  It contains stuff that I did when I started out.  Whereas last year’s show had a story arc, as will the next one, this is more a show case of my favourite stuff.

G: What’s your favourite effect in the show?
D: I’ve actually got a few favourites in this one.  It’s a more technical show that I usually do.  There’s quite a few more props and a lot more preparation.  I play a lot of games with the audience and I quite like this thing I do that involves mixing up the audience, having a few people wear silly things but still being able to predict the outcome of the chaos.  It really wouldn’t fit into any other show I’ve ever done because it’s just silly but really fun.

G: Do you consider yourself a magician or a mentalist and is there really a difference?
D: I’ve heard performers call themselves magicians, mentalists, forensic mind reader, deception artist… you name it.  I’d consider myself a Dave.

G: How do Skeptics audiences differ from “regular” ones?
D: Skeptic audiences are genuinely one of my favourite to perform for and I’m not just saying that.  Any group of people with a shared interest always makes for the best show.  Most shows have a bunch of strangers in a room and part of the performers job is to unite everyone into one voice, one laugh, one big round of applause but with a group like the skeptics they’re already united and what better flag to unite under than one of logic and reason.

G: You’re also spreading the cult of Dave in your new book SIX SIX SIX, tell us a bit about that
D: SIX SIX SIX is a sort of comedy self-help book.  It teaches six magic tricks, six life lessons and I also review the six best burrito places in the UK. I’ve always wanted to write a book and I’m exceptionally proud of it.  It’s also given me the encouragement to write more.

G: Who are your favourite magicians/mentalists?
D: I mean, it’s tough to pick individuals.  I grew up watching Paul Zenon, Derren Brown, Penn & Teller and Tommy Cooper.  The latter was mainly old video tapes that my grandparents had.  Since performing at the Edinburgh Fringe I’ve had the privilege of working with some of my heroes and meeting new ones.  This year I saw a guy called Charlie Caper who was performing in the same venue as me.  It was honestly the best magic I had ever seen.  Seriously, YouTube that guy.

G: Is there a famous effect that you wish you’d invented?
D: I wish I’d invented everything.

G: You’re back in Nottingham in March 2017 when you bring The Cult of Dave to the Theatre Royal. Can we expect a bigger spectacle to match the bigger venue?
D: Thankfully I don’t think I’ll be doing the main stage, The Cult is definitely built for a more intimate setting.  Although there might be a new surprise or two in there.

G: And finally, in your book, you mention the Challenge Burrito in Sheffield and that you’re going to attempt it this year. How is training going? Can you do it?
D: I said I’ll be doing it before 2016 is up.  I might round off the tour with a Challenge Burrito.  My plan is to do a 10k run beforehand and have a huge dinner the night before to increase the appetite.  I’m taking it pretty damn seriously.

David Alwinck brings his show The Cult of Dave to the Theatre Royal on the 20th of March. For more information and tickets, check out the Theatre Royal website: https://trch.co.uk/whats-on/dave-alnwick-cult-dave/