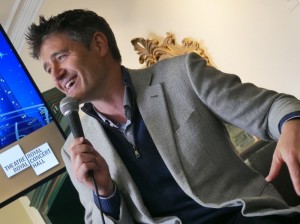 The musical CRAZY FOR YOU is to visit to the Theatre Royal this Autumn.  Our leading lady, TANYA LOUISE caught up with their leading man and Casualty star, TOM CHAMBERS

I read that Crazy for You is your favourite musical, what is it about it that makes it so special?

It was one of the first musicals I saw when I was about 18 years old or thereabouts, maybe 15, earlier than that.   I didn’t go into the industry just because of seeing something, because it all happened by mistake during a game of football in morning break.  When no one had gone up for the school play, the teacher came over and said “Right, all of you of you audition at 3 o’clock this afternoon”.

I ended up singing Rhubarb down the microphone over and over again. It was Dracula Spectacular and I ended up getting the part of Dracula and it felt very natural when I was doing it and thought, well, I may have found the thing I wanted to do.
Crazy for You was one of the first musicals I ever saw and I just thought, the combination of it being so funny, the script itself is so funny, all the characters , the way they intertwine. You’ve got really brilliant characters in the desert and then you’ve got the guys in New York, and Bobby is such a fun character to play. He obviously wears his heart on his sleeve and sees the girl of his dreams, but the lengths he goes to try to get the girl, master of disguise.  It’s a bit like being Peter Sellers in the Pink Panther as well, you know, within the musical, because that’s what Bobby does, he sort of dresses up as someone else and there’s mistaken identity and then on top of that, tap dancing, which I absolutely love to the core of my bones, because its like playing the drums with your feet, and then the music of George Gershwin. For me, in my book, it’s the best music, he’s got such a rich kind of jazz element to it, such great rhythms and it’s all the best songs, I’ve got Rhythm, Slap that Bass, They can’t take that away from Me, Embraceable You, Naughty Baby.

Caroline was a Strictly winner as well, have you compared stories or had a bit of a dance for old times sake yet?

We did the show-reel for the tour together, and everyone knows what an amazing dancer she is, but she’s really fun to dance with, there’s a good energy, she’s like a little dynamo. This is her debut and she’s going to be absolutely brilliant because she’s very sparky, so the part of Irene, for her, is absolutely perfect. She’s a brilliant dancer and she’s working really hard on her singing as well. She’s got quite a character song to do so it’s not like she’s having to go into an area where she’s going to have to sing opera or something like that, so its a really perfect part for her.

Have you started rehearsals yet?

We start rehearsals in July, but we’ve done this show at the Watermill in Newbury. We did it as the tester there because it’s never been done like this before. This is a totally new production where instead of the orchestra being in the pit they are going to be on stage as well and they are going to be the characters, so they’re singing, dancing, acting and playing a musical instrument all at the same time, so there’s always a ton of things to look at and I love seeing people play a musical instrument as well.

I am actually picking up the trumpet, but at the time I’m wearing a moustache, it’s quite tricky, and it’s a fake moustache as well but for a very brief amount of time I pick up the trumpet.

Do you prefer working in TV or theatre?

I think for me, it’s six of one and half a dozen of the other. Theatre is so lovely, it’s in the evenings it’s very romantic, it’s a lovely atmosphere for the audience, it’s live, anything can happen, it’s always slightly different, it’s a very kind of rich tapestry of entertainment and the energy is so good. whereas television you get your weekends if you’ve got a family and if you get a good part, like Sam in Casualty and Holby It’s two completely different art forms,but equally enjoyable in their own right. I’m very lucky to be able to mix it up.

How do you prepare for life on the road?  Does it differ from life in front of the camera?

Yes, life on the road has really got to be about maintenance, energy levels and looking after yourself. When you’re doing eight shows a week you do have to watch what you eat. You can’t put anything in the fuel tank, it’s got to be really good, slow release energy and just not burning the candle and both ends because you know that you really want to be there for the audience, give them everything they deserve. So I won’t be going to bed too late. I shall have a hot cup of cocoa. You just have to look after your body, stretch and maintain it. Eight shows a week is like being an athlete whereas television it can be very long hours. You have to be in at seven and you finish at seven and when it’s medical it’s quite technical but you have to learn things quite quickly, so you can’t delay production, so it’s tense but in a different way.

Do you know what, I was on Twitter and I’m not catholic but I think I suffer from catholic guilt because when I was on Strictly, and suddenly you start to get multiple thousands of followers and they all ask you a question I feel like I don’t want to leave anyone out and so I thought I’d better just go back to the old-fashioned way and if anybody really wants any special requests then just do it the old-fashioned way, pen and paper, letter to the agent and then we can do it.

So you’ve probably not seen that twitter goes into a bit of a meltdown on a Saturday night when Sam appears in his suit?

Oh, no I don’t! I’m almost too scared to look because Sam is being quite a hard character at the moment. He was a registrar and now he’s a consultant so the weight is on his shoulders. Someone asked me ‘Where is the old Sam?’ hopefully he is going to come back a bit more.

Sam had a big storyline in Holby in which he had Non-Hodgkins Lymphoma, so that must have been a tough role to play?

It was and it was so brilliantly written, it was a real honour to do that.

Yeah, I hope he’s not a complete idiot and that he’s not too dis likeable, but yeah I think he’s just been backed into a corner, because he’s come in and he’s had to take medical director and any roles in middle management are not going to be easy. It’s not about patient care. You want to be helping patients and saving life’s, not balancing the books and that’s hard for a character like Sam. My Dad would love that, he’s an accountant and he’d be wanting to get the books straight and see where we can find money.

So your parents aren’t in show business?

No, I’m a complete outcast, I’m the family runt, one of five and somehow, I don’t know how it happened but it did.

So you will return to Casualty

Yes, I’ve just done six months so this tour is running from August until next May and then I shall hopefully be going back as Sam after that, so Sam will be departing to New York at some point but that shouldn’t be spoiling it.

You’re back with the wonderful Amanda Mealing. What’s it like working with her again?

She’s amazing. It’s funny because it is like your part of a family because when you’re with each other five days a week, seven until seven, there’s a real warm connection there from all the scenes you’ve done. We’ve been in tears together because we nearly lost Grace and fighting over Grace, her saying “You can’t see the baby’ I’m not going to allow it”, so we’ve been through so much together. It’s great being back, it’s like a really lovely warm hug and she’s just brilliant to work with. She’s very sparky and dynamic and she keeps you on your toes because you don’t mess with Connie.

Can we expect some big story lines when you come back?

Yes, because I’ve not been doing too much of the patient thing, Sam’s been on the back foot but there are things coming forward, without spoiling it, where he’s much more on the front of the screens as opposed to in the background so, yeah, hopefully there will be plenty more.

Finally, Tom. Why should the people of Nottingham come and see you in October?

Oh, people of Nottingham! Because I’m a local lad, and because if there’s one musical in the year that you need to see, I do think it’s Crazy For You because of George Gershwin. It’s just the best music, funny script. Some musicals lack one element, where it’s a bit thin on the ground, whereas this, it’s so well sown together with the characters and its so funny,  I just think it’s charming.

Tom Chambers will be staring alongside fellow Strictly champion Caroline Flack in CRAZY FOR YOU from 3 – 7 October  Tickets are available from: https://trch.co.uk/whats-on/crazy-for-you/