Founded way back in 1981 the Reduced Shakespeare Company have become renowned for taking huge topics, such as the complete works of William Shakespeare, and condensing them down into fast paced, fun filled shows. The trio are currently on tour with their latest show The Complete Word of God (abridged), a show that  hasn’t been without controversy.

The tour stops off in Nottingham in March however when we caught up with group member Gary Fannin they were making their way to Haverhill.

As Gary tells us The Complete Word of God (abridged) is the ninth such show they have put together and aims to tell the complete story.

“We’re covering the good book but making it better” Gary tells us. The show will retain the style that has been prevalent through all the groups shows being fast paced, fun, silly and with plenty of slapstick.

“This is the most slapstick show we’ve done, with lots of costume changes and characters. Plus lots of bad wigs and sheep”

Tackling a subject like the Bible is something that has to be done somewhat carefully as Gary admits.

“You have to treat it with a lot of respect, we aren’t looking to mock the book and we don’t want to offend anybody, it’s about taking all the best bits and making them fun.”

“We feel a bit like we’re doing a public service. A lot of people have read some of the bible but not many have read all of it. In fact that’s a question we ask at the beginning and usually about half have read it. Sometimes people who have read it will be reminded of things they have forgotten thanks to our show”

Unsurprisingly though when tackling such a subject in a humorous way you can never be sure that everyone will be quite so accommodating as you’d like, as the group found when the first dates of their tour were initial cancelled following protests in Newtonabbey. 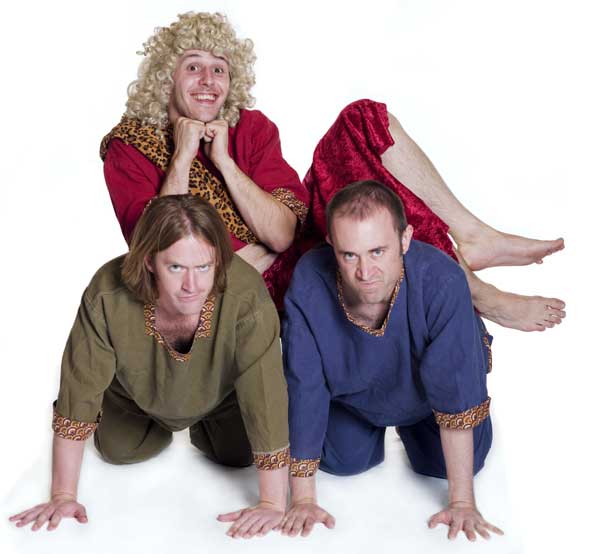 “We call it the Kerfuffles” Gary tells me, referring to how the show, due to take place at the Theatre at the Mill in the town was initially banned, before being unbanned. The problems it seems came about through a lack of understanding.

“It came from people who hadn’t seen the show, and the snippets took things out of context so they got the wrong idea. We spoke to these people and invited them along.”

The incident, far from causing problems for the group, actually turned out to be a blessing in disguise as it drew attention to the show.

“Twitter exploded” Gary tells us, “and tickets went through the roof. Beforehand we’d only sold about 80 tickets per show then after the show was banned and unbanned we sold out in a matter of hours”.

Among those that did come along to the show included a Sunday School and even members of the clergy, all who were left pleased with what they saw, a show that gave homage to the world’s most famous book rather than mocking it – as it seemed many feared.

On March 19th the group will make their way to Nottingham for a show at the Playhouse, a regular stop off for the guys, and they are certainly looking forward to it.

“We love the Playhouse” Gary says, “we always have a great time and get a fantastic reception, and it nearly always sells out”.

It’s almost time to go but on a final note Gary has this to say about the show:

“We are not mocking the bible, what we’re doing is honouring it through laughter” he tells us, adding, “and the thing is it’s important to have a sense of humour about life”.