The first ever Amazement Festival kicks off at the Nottingham Racecourse tomorrow, we spoke to  Hannah Larham of Audacious Face and Will Robinson from I’m Not From London who between them are running the Kerblammo Stage tomorrow. 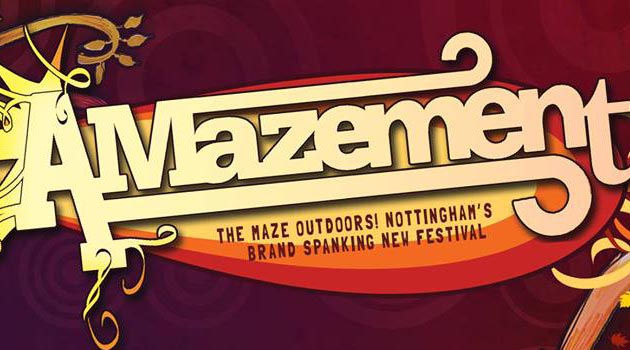 Howdy and thanks for agreeing to chat to us.

So, it’s the first Amazement Festival this weekend, you must both be looking forward to it?

Will: We are literally balancing on the tips of our wheely chairs at The Maze as we type; it’s getting difficult to drink our coffee if the truth be told. Hannah’s on Valium due to walking around in a catatonic state of Amazement for the last three weekends. Just look at her eyes for God’s sake!

Hannah: I’m totally amazed for Amazement, and the response has been amazing… how many times can I use ‘amaze’ in one sentence..?

Hannah: Amazing answers for amazing questions about Amazement… I am amazed at how amazing we all are.

Will: I’m amazed you could fit that many amazing references in one answer to be honest – Amazing!

You guys are curating the Kerblammo! stage on Saturday, what do you have lined up to amaze those coming along?

Hannah: Well, as you know Kerblammo! only ever features the best in Nottingham music and this weekend is no exception – Bama Lama Sing Song are headlining, who are a communal rock sing-along band, they play popular songs that everybody knows and the audience sing along! We also have everything from the grungy alt-rock stylings of Privateers to booze-drenched blues from Haggard Cat Bothday Present to bleepy melodic dance from Tray Electric. It’s a typical Audacious Face and I’m Not From London mash up!

Will: We’ve been promoting gigs and festivals for a long time and we think this is going to be one of our most fun as it’s involving so many of the people we’ve been working and playing with in our years involved in the local scene. The Maze was the first place to give me a regular slot promoting in the city and Ben sponsored our trip to London on the busses we ran a few years ago. The Maze really are an institution in this city and we’re very proud to be joining the team for this festival, the whole team there from the bar staff, to the bands, the sound men and the owners are a real family to me and all of us at I’m Not From London we’re looking forward to this weekend a lot as we know it’s going to be a lot of fun for us all!

As you’ve said it’s a great mash up of styles on the stage, but how difficult was it to narrow down to such a small number of acts considering the huge pool you have in this city?

Will: Luckily we’ve a shitload of awesome bands in Nottingham so picking brilliant ones wasn’t too hard, it was hard not choosing lots that we like too but that’s one of the most difficult decisions we have to make with these projects so we take it very seriously and have to weigh up options of their local fanbase, how varied or unique they are, how much they would want to play the festival, how easy going they are too and how much this would benefit them!

Of course, as Hannah, mentioned, it all finishes off with Bama Lama Sing Song, this is a great concept that has been a huge success at Spanky’s and Rescue Rooms, is it fair to say this is set to be the biggest yet?

Will: Yes, I’d say so, I’m Not From London have been putting on Bamalamasingsong since last year, starting off at Spanky Van Dykes and now at The Rescue Rooms, everyone has such a party all singing the cheesy anthems that they all pretend they’re too cool for school for normally! A very fun party every time, plus I have the voice of an absolute superstar slash angel so everyone gets an unforgettable audio treat that is my original sound.

Hannah: I was very suspicious the first time I went along as I’m not a fan of karaoke, but it’s completely different and has a great community feel. I thought I’d need a few Jagers in me before I joined in but I was belting out Bonnie Tyler within ten minutes of setting foot in the door. I knew we had to get Bama Lama at Amazement.

Hannah: Obviously the Kerblammo! stage is enough reason in itself to come down, but don’t forget the rest of the festival as well – there’s 4 stages with 70+ local and national bands, including Space (remember them?!) and loads of other stuff to keep you entertained – and it’s all for charidee, like most of our big events.

But of course, I was referring to the chance to hear you and Will belting out the classics as being a fine selling point in itself

Hannah: He uses me as an air guitar usually.

Will: I do. Hannah has a fine yet fretless neck.

Well there you go, that in itself is something not to be missed. So what would you pick out as your ideal BLSS song?

Will: My signature tune is “Total Eclipse of The Heart”, what’s yours Hannahbananna?

Hannah often cries when I sing.

Hannah: It’s gotta be ‘All Out of Love’ by Air Supply, because even though I hate it I’ve had it playing on repeat in my head for well over a year now. I’ve got the chorus carved into my arm. That was a dark time…

Will: I’d say “Let’s get fucked up” by the Cramps would be particularly apt?

Hannah has already mentioned it briefly, but as well as loads of great music there is a lot of other stuff going off across the weekend, can you give us a brief overview of some of the things lined up

Will: Well the music’s obviously going to be the thing that keeps people dancing but we have a funhouse comedy stage hosted by Funhouse comedy’s Spiky Mike, they always have brilliant acts, I’m going to spend quite a bit of time in there I think!

There’s also Rock and Roll’s bike show for those of you into cunning stunts.

Also for the kids and families there’s the AMAZING Johnny and the raindrops and Laura Kybird’s face painting who with her magic can even make Gaz look good. There’s bouncy castles a fun fair and all of it is being broadcast to the nation from the noise level critical media tent. The Red Dog Film Company are also documenting it all for everyone to see, 80% of it is covered so come rain or shine, everyone’s gonna have an amazing time!

All in all plenty of great stuff going on then, so in one sentence each, why should people make sure they get down to Amazement Festival this weekend?

Will: “There won’t be anything better to do anywhere at any point no matter who you are or where you come from – fact – plus it will make you both cooler and you’ll have that peace of mind that comes from supporting the awesome local charities that are Framework, The Lee Bonsall Memorial Fund and NG7 Foodbank whilst drinking, dancing and being amazed all at the same time”

Hannah: I’ll be there. That’s enough for anybody, surely?

Of course that goes without saying.

Finally, who would win in a fight between a Moomin and a Care Bear?

Or Swedish. Or Finnish. I can’t remember which. They’re Scandinavian, anyway

Will: What she said!

Will: See you there Darren! Thankyou!