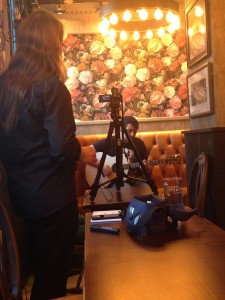 I met up for a chat with broadcaster/writer and filmmaker, Steve Oliver, about one of his latest projects, The Random Sessions.

So, Steve, tell us a bit about what the Random Sessions are?

It’s a YouTube series of acoustic performances, not like MTV unplugged where there were amps and microphones. It is 100% raw, just a guitarist or a singer with an instrument. No auto-tune, it’s just them singing and probably one of the only times they’ve not relied on microphones and amps at all with the exception of rehearsing in their bedroom, so it’s something to test them as much as anything else. The only microphone in place is the one on the camera, it gives it a completely raw sound. The artist has to be aware that they are stripped raw.

You film upstairs at the Hop Merchant, how long have you been using the location?

About six months. Before that, I was using another place in town but they wanted to charge. For a free series, which doesn’t make any money, I wasn’t happy with that because although we were using their room, we weren’t depriving them of a paid session, so I decided not to bother anymore because they wanted £20 for less than half an hours worth of work so if I’m not making money from it, I didn’t want to shell out that much to guarantee the room when Kevin here at the Hop Merchant was really keen on the idea.

Well, the Random Sessions came from the Random Saturday Sessions which was a slightly different animal. It actually originated from a film I made called the Hockley Hustle Practice Run in 2015.

I do a Sunday alternative stage at Bunkers Hill for the Hockley Hustle and a load of us just got the idea to do something in a publicity stunt kind of way, so one Saturday about a month prior to the festival we went round with instruments, virtually busking. We met up in the morning and we’d go to a cafe or a shop and say can we do two songs on film. We had a great day. Everyone was cooperative. Shops would move furniture for us and cafes would turn the music down and all that sort of thing. It was a good social as well because although musicians all hang out together, they only seem to hang out at gigs and I’m the same, I’ve got a lot of friends who I only see when they’re playing so it was almost like going out to play when you’re kids. We’d eat afterwards and have drinks and play pool and it was a really nice social day, so from that, the random Saturday sessions were born. We would be up on a Saturday morning and just again with completely no prior speck, we’d just go in somewhere and say can we play two songs and we very rarely, only on a couple of occasions met with a no.  Then it became difficult to organise. We did the last one in town about a year and a half ago and then I came back and reformatted it like this.

Any names that you think we should look out for?

Cameron Sinclair Harris is destined for good things. Yasmin Osaka; she went on to do an EP launch. It’s great to have this intimacy. There’s a lot of video podcasts and things but I do feel that this is a bit different.

If an artist wanted to get involved, what should they do?

How many tracks do the artists perform per session?

The format is three originals and one cover but the cover is if their choice, so in the case of tonight I’ve not heard of the artist they covered.

Is it any kind of music genre?

Yes as long as its acoustic.

Finally, have any of the acts that have appeared moved onto bigger things?

There are names that you would know if you know Nottingham Music. Josh Kemp has done one, Paul Carbuncle, Gerry Trimble. I like going to open mics and pulling artists in. I go to smaller ones now than I used to because I got a bit bored with going to gigs in Nottingham. I go to the Kimberley sessions every month and I found quite a few people there, the likes of Claire Shaw, Libby Mayfield, Cameron Sinclair Harris; he’s done a few and he’s on his way up now so it’s nice to do this. I do find it hard to approach women and say can I film you upstairs in a pub but it works.If I find someone on an open mic and give her a spotlight it’s good. It’s good for me and it’s good for them. I’m not John Peel or anything but…

Interview and photos by Tanya Louise