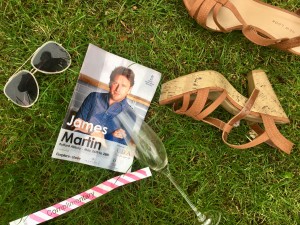 It has to be one of my favourite times of the year – festival time!

In recent weeks I’ve been to the Notts County Show and ,venturing further afield, Althorpe Food Festival.  May bank holiday saw the welcome return to Nottinghamshire of the Great Food and Drink Festival 26 – 28 May.

This year the event moved from it’s previous home of the grounds of Nottingham Castle to another picturesque setting – Rufford Park.  I know there was some initial concern among people I spoke to about it’s new location pulling in the public, after all the idea of a food and drink festival is literally to eat and drink isn’t it? Which made the castle easily accessible, however, thankfully, show a foodie a whole array of artisan food and drink, the producers behind the products, some fabulous demonstrations and of course, a well organised festival and they will travel.

Of course the great weather helped.  Sunshine always lifts peoples moods and creates an amazing vibe at a food festival as people move from stand to stand, trying something new and just enjoying the atmosphere.  Yes there was alcohol. The big red bus parked up serving drinks in an area where visitors could enjoy live music. There were other stands offering real ale and so on but there were also juice sellers and coffee stands.  Drinkers could take home a selection of beverages to drink later, or there were buses that run from the city centre to the site.

The backdrop of the Abbey made for a beautiful setting for the serving of hot and cold foods.  Within the Producer Marquee there were hundreds of delicious treats to take home too.

James Martin was the ‘big name’ of the festival this year. He appeared to rave reviews on the Saturday.  We decided to go along on the Sunday to catch the demos from BBC TV’s Chris Bavin.  I worked with Chris at the Northampton Food and Drink Festival last year and he is one of the nicest blokes in the business you could meet.  He stopped to chat after his demo as did another friend, presenter Penney Poyzer who I met recently at a meeting about the Good Food Charter which I’ll be posting about soon too.

There was something for all the family with entertainment for the kids as well as workshops in the Go Bake marquee where they could learn all about baking as well as pie and burger making.  Without quoting Whitney, I think its important that children learn about food and where it comes from, after all, they’re the foodies of the future!  Younger children could join Beebops for pre-school seasons of seed planting and food workshops. 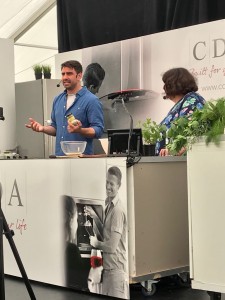 My personal favourite is the Chefs Demo Theatre. As well as headliner James Martin and Chris Bavin there was demonstrations from Harts Restaurants, Daniel Burridge, Harrison Jones, Rev Kate Bottomley and Alain Launays.  I could watch them cooking all day, and to be fair, if you wanted to you could as demonstrations ran throughout the day everyday.

Did you visit? What did you enjoy the most?

Words and photos by

Disclaimer: Our tickets were complimentary but my views are my own.