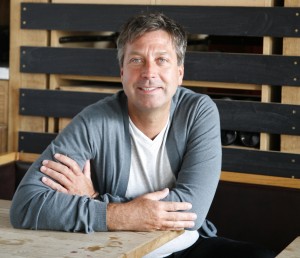 “I’ve actually been sent a fantastic list of fruit and veg that’s grown in Clumber Park’s Walled Garden so I’m going to be using that in my demos which I’m really looking forward to” John Torode tells us.

Best known to millions as the straight-talking co-host and judge of BBC1’s Masterchef, John has also written a number best-selling cookbooks, his latest, My Kind of Food was released earlier this month and coincides with an appearance at this years Festival of Food and Drink at Clumber Park.

We caught up with the hugely popular chef prior to his visit to Nottinghamshire, which he tells us will be his first, so one he’s really looking forward to.

Taught to cook by his Nanna, John’s whole inspiration for his latest book he tells us, was “for his children; to create something for them that they can pass on too, a collection of favourite recipes” The recipes included are not only from Nanna, but also his Grandfather and father, along with his own style of cooking  “Every time I travel somewhere new,  meet new people, there are always influences. New flavours, new combinations that get you excited” he says, and so he writes “whenever the inspiration strikes”.

Not one to beat about the bush we begin by asking John about THAT apron. The part bondage/part dungaree ensemble he wore on Masterchef sent Twitter into meltdown, and is sported by the 50-year-old Aussie once more on the cover of the new book, so was it a conscious decision? ( because to be fair we’d probably buy the book for that alone) ‘My apron did cause quite a stir but it wasn’t intentional. I wore it because it’s a really good apron, designed for me by Dawson Denim in Brighton, it’s very comfortable and I love it. Not everyone did according to Twitter. For some it was like Marmite…’

Speaking of Masterchef, we read recently that you don’t socialise with Gregg Wallace away from the programme. To those of us that like to think that the cast of friends hang out in a coffee shop or the Monkees live together in a beach house, that comes as a real blow.  So is it true? “Greg and I have very different lives” says John “so when filming ends we’re off with our own families doing different things or work with different sets of people. We’ve spoken a handful of times since the last series ended as we’re both busy doing other things.”  So, if we must accept that the pair don’t go out for a cheeky couple of beers and a curry together, when John does dine out, does he see the look of fear on a chefs face when they realise they’re going to be cooking for one of the UK’s best-loved chefs and Masterchef judge? “Sometimes,  but if the restaurant is good and they know what they are doing, they have nothing to worry about. What I eat depends what I have an appetite for at the time,  I’m not there to judge, I’m there to relax and enjoy a nice meal. I don’t put any pressure on them, they’re doing that themselves.”

John was chosen by the BBC to present the re-launched Masterchef in 2005, the show, which has been sold to 25 countries, also spawned the spin-off Celebrity Masterchef, so when he sees the names on the list does he have an expectation of how good they will be in the kitchen?  “I never pre-judge them, there’s no expectation because you just never know! As for who surprised me most… Rylan Clark. He’s a really clever, brilliant cook. He did exceptionally well” Johns partner Lisa Faulkner, the actress, presenter and now celebrity cook appeared on the show back in 2010 taking home the Masterchef trophy.  Meal times in their house must be a fantastic affair, so how do they decide who cooks?  “It just kind of naturally happens. Sometimes I’ll cook, sometimes Lisa does it; we may cook together. There’s no plan, it’s just a natural thing” So are they critical of each others cooking? “No, there’s never any judgement”

He’s been on our TV’s since the 90’s, however John will cooking live in the food theatre at Clumber Park this Sunday. We asked him how a live demo at a festival differs from cooking on-screen?  “It’s completely different because you are there showing what you can do, and you need to keep people engaged and entertained. You need to put on a good show for the folks who have made the effort to come and see you. It doesn’t always go 100% right but 99% of the time, everyone has a great time.” So what can we expect to see John dish up on Sunday?   “I’ll be cooking up some Posh Curry Cutlets, Posh French Toast, and then I’m doing an Indonesian Seafood Curry, Steamed Passion Fruit and Mango Puddings with custard…and yes…I’ll be bringing THAT apron”

You can buy copies of John’s fabulous new book My Kind of Food from Amazon by pasting the link below into your browser: