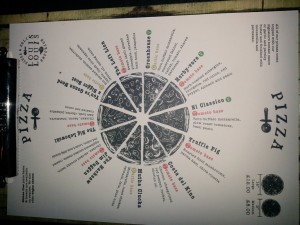 Lets face it Louis Louis has some rather large pizza shoes to fill at Das Kino. NottinghamLIVE went along for a slice of the action on launch night.

Ambitious Nottingham chef Louis Gray, aka Louis Louis  has taken up the sought after residency in the Fletcher Gate pub turning up the heat on the city’s already vibrant restaurant and bar scene with his unique new Pizza & Deli Emporium. 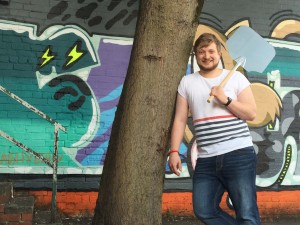 When we arrived at 7.30 the launch had already been in full swing for an hour. The invitation only event held by Tank PR was full to the rafter with the beautiful and hungry people of Nottingham.

Handed a voucher for two free drinks each, we made our way to the busy bar. Lubricated with alcohol, we viewed the joint on the hunt of the promised pizza.  Seated attendees seemed to have empty plates before them but it  quickly became apparent that at this point in evening the freshly baked plates of pizza were barely making it past the raised dining area and down the steps past the DJ. 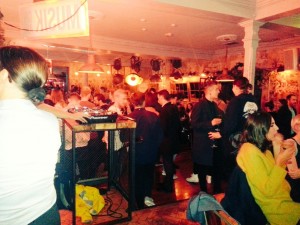 Survival instinct kicked in and we made our way closer to the kitchen to be in with a chance of food.  Our journey paid off as we were rewarded with a slice of the Herby-vore pizza.  A vegetarian pizza with a tomato base, torn buffalo mozzarella, slow roast tomatoes and basil pesto.  The base was most similar in style to a stone bake, crispy round the edges – softer in the middle where the dough absorbs some of the topping, which was fresh and flavoursome.  The pizza is one of a range including  ‘The Big Lebowski’, ‘You’re gonna need a bigger boat’,  ‘Costa Del Kino’ and other brilliant names including the ‘Mutha Cluka’ which was our second sample slice; a garlic base topped with mozzarella, roast chicken, spinach, feta and pine nuts. Again the pizza was beautifully fresh and piping hot. 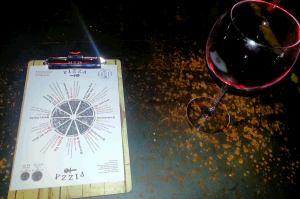 By this point we’d had our second free drink of the evening and had already purchased our third and fourth by the time a small bowl of wedges were bought to the table to share between us a another group nearby, one of which immediately picked up a wedge and dunked it in the dip to then leave it on the side, presumably to mark it as hers! Where’s your manners love? The wedges tasted good but were a little soft throughout, I prefer mine crisp on the outside.

The waiters did try and make it past the steps throughout the time we were there, but a lot of the food seemed to end up going to the same table (not ours) I’m not being greedy – we’re a food blog we were there to write about the food but two hours later we’d had only two slices of pizza and a couple of wedges to go on. What we did have was pretty good but possibly didn’t do enough to persuade us to visit to try the other food which includes Bratwurst baked beans, chicken strips with honey mustard and spring onions, warm giant pretzels with hummus, balsamic vinegar and oil. Deli style sandwiches and homemade cakes will also on offer alongside a Sunday Brunch Service (though as I write this – I am thinking giant pretzels sound pretty damn good!)