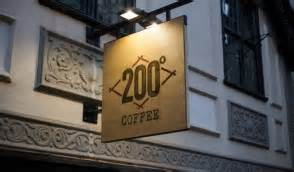 It’s official, 200 DEGREES in the Flying Horse Walk in Nottingham, is serving up the best coffee in the UK – after scooping two top awards in the national Coffee Stop Awards.

The shop was voted best in the UK for business people by winning the top slot in the ‘Best for Working Out of Office’ category at the award ceremony in London.

The popular coffee shop which we reviewed back in January, only opened November but managed to take second place in the overall UK’s ‘Best Coffee Shop in Britain’ category which was topped by a London café.

The Coffee Stop Awards, held at the Caffe Culture Show at Olympia, are the most prestigious of their kind with more than 60,000 people voting covering all coffee shops across the country.

200 Degrees managing director Tom Vincent, said: “We are all absolutely delighted to have picked up such recognition at a national awards ceremony. The Best for Working Out of Office award is really an indication of how much people like using us for work and small meetings, it’s good that we can really help that way.

“And to be voted runner-up in the whole of the UK in the Best Coffee Shop category is really something special for us. As the winner is London-based, it’s nice to know we are the best outside the capital.

“200 Degrees coffee shop has been hugely successful within the city, but we can’t quite believe that less than a year after opening the doors, we have had so much national recognition in these awards. This really is testament to the work of the team at the shop and our great customers who got involved and voted for us.”

If you read our previous feature you will know that The 200 Degrees brand extends far beyond the coffee shop. 200 Degrees roasts its own beans, supplying blends to cafes, restaurants, hotels and businesses across the Midlands including The Moleface Pub Company which has several outlets across Notts, The Quad in Derby, The Wingerworth Pub & Kitchen in Chesterfield and Notts deli chain Philo’s. All together, the 200 Degrees group now employs a staggering 120 staff.

As well as offering high quality coffee and food at the city centre café, 200 Degrees also offers a barista school where people can come along and learn all about how to make the perfect coffee from the café’s experts. Something we’re keen to try.

200 Degrees is the brainchild of university friends Rob Darby and Tom Vincent who met some 20 years ago before setting up their first venture together in 1997 taking on a tenancy of The Old Peacock in Lenton. They’d better invest in a trophy cabinet now as the shop has also been shortlisted in the Nottingham Post’s Nottinghamshire Food and Drink Awards 2015 in the Best Café category.