With over 15,000 visitors, this years Festival of Food & Drink was the biggest and best yet.

This is the third year running I’ve been to the festival and I’ve got to say, it is the highlight on the festival calender. Not only is it well organised but also well laid out, with an amazing array of choices.  I could spend an absolute fortune so I have to try and be good.

The Festival always attracts some fantastic chefs too, this year is no exception with John Torode topping the bill. We’d been lucky enough to get a telephone interview him prior to the event and not surprisingly it was a full house for his demos, with standing room only, 5 deep going out of the cookery theatre. Even in heels I could only catch a glimpse, serves me right for losing myself in the food marque – or heaven in a tent as it should be known. 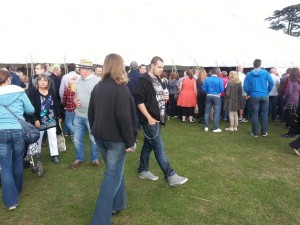 There is absolutely everything a foodie could dream off under one roof in the food marque from a whole host of producers, ranging from artisan bread and cheese to gourmet chocolate, via pretty much every alcoholic drink you can think off. It’s a great opportunity to try something new whilst supporting independent producers.  My only slight gripe is certain people who seem to simply wander round just eating as many samples as they can, pushing their way round and often pushing the serious foodies out of the way. 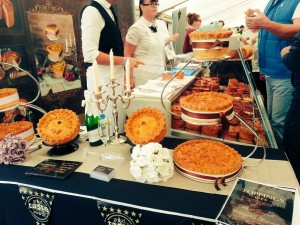 The weather always makes a difference at these events and thankfully so far every year I’ve been it’s been a glorious day and this year was no exception.  It’s great to see people strolling around the catering vans and actually being able to sit and enjoy their food OUTDOORS!

I’d got up fairly early as its a good run to Clumber Park, so my first stop was Romano’s cute little van for a large black coffee. Caffiened up, I was ready to hit the stalls. My arms were aching by the time I went home but always on the lookout for something different, these were some of our favourite finds from this years festival. 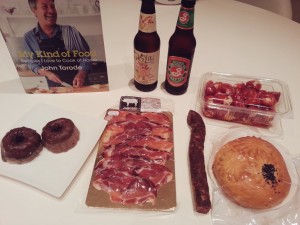 The award winning chicken and chorizo savoury brioche pie from Cossack Cuisine was presented with bronze medal at the 2015 Great British Pie Awards in the ‘Chicken and Other Meat’ class. British chicken and Spanish chorizo blend with some great seasoning Russia. 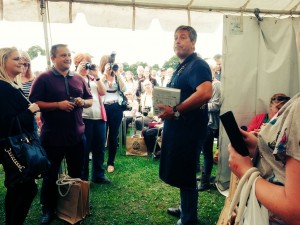 We got some great Feta stuffed red peppers from a stand. I won’t name names as I was a little disapointed in the fact that I just asked for a small tub but they kept cramming them in – they then passed it to someone further round the counter who weighed it then gave you the price. Mine came to over £11, definitely more than I’d wanted to spend on them.

Worse was to come, later at the meet and greet with John Torode I remember thinking, wow, he really smells like food….like something pickled almost….only to find later that the tub had popped over in my bag and was leaking. I’d like to say that was the worst memory John Torode would have of me – I’d like to – however an exploding can of beer put paid to that idea.  So busy was I juggling my bags for the photo opportunity I didn’t realise I’d let go off one of the handles.  As I walked away the bag containing the beer I’d bought from Beer Heros dropped to the floor. Imagine if you will a warm can of beer that’s been shaken as you’ve walked round the festival. Upon impact with the ground it created one of the best fountain/rocket combinations I’ve ever known, covering the poor lady in front of me.  The hiss as it fizzed out and upwards was loud enough to turn most heads in the VIP gathering, including the stuffed pepper smelling John Torode, who, in his unmistakable Aussie Accent enquired ‘Is that beer?’ I gathered up the remnants and tried to scarper. The last words I heard were those of John Torode as he said ‘We’ll get you another one’ which proves he’s actually a really nice guy, I just wasn’t hanging around to find out if he would. 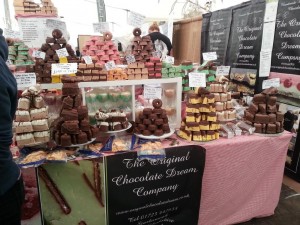 So most the items we bought were marinaded in beer by the time we got home, including some great chorizo from Jaquest and a Baileys and Chocolate double cream bomb from the Original Chocolate Dream Company.  The latter mentioned had the most beautiful looking stand. The chocolates looked more like bath bombs then edible treats and were more fudge like in taste as opposed to chocolate.

The popular festival has already been confirmed for next year, taking place on 18th & 19th September so make a note in your diarys – oh and next to also put a note to put beer in car before meeting celebs!