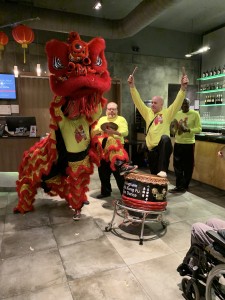 I don’t know about you, but I reckon the Chinese have got it right having a New Year in February.

My reasoning is this:

2. New Year as we know it is too close to Christmas. We’re all partied out

.3. There are still chocolates in the house – so how am I expected to even keep any resolutions.

4. February is a non event month (other than Valentines day and that’s disappointing) 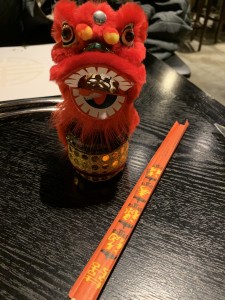 Well, that’s my reasoning anyway, before you start telling me the real reasoning behind the tradition.

Speaking of traditions, I was invited again this year, as I was last year, to celebrate Chinese New Year at Cosmo on Milton Street in Nottingham. It was lovely to see the same group of media bods and food bloggers as last year. Spending time, and eating, with family and friends is an important part of the Chinese celebrations, so it was nice to see familiar faces. 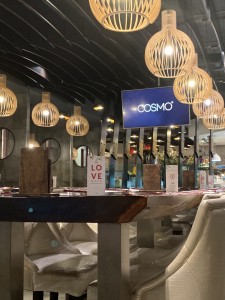 This year we were welcoming the year of the Pig. The Pig is the twelfth of all zodiac animals. According to one myth, the Jade Emperor said the order would be decided by the order in which they arrived to his party. Arriving after the Dog, who was late and number 11. The Pig was even later because he overslept. Another story says that a wolf destroyed his house. He had to rebuild his home before he could set off. When he arrived, he was the last one and could only take twelfth place.

Arriving late? chubby little face? Sounds familiar – could this really be my year?! I doubt it because in Chinese culture, pigs are the symbol of wealth and I won’t be opening an off-shore saving account anytime soon. I’m more B & M than M & S.

Before the arrival of the Chinese lion we are welcomed by our hosts and told to help ourselves to starters. The Buffett restaurant offers many many cuisines so it is perfect for hungry tummies and for those wanting to try something different. In keeping with the night we all chose from the Chinese station, one of 10 live cooking stations.

Accompanied by a drummer, the lion tours the restaurant, which is we are told to bring luck. Rather than stay in one area, to bring prosperity it must travel the restaurant, potentially even the kitchen. It really brings the evening and celebrations alive. 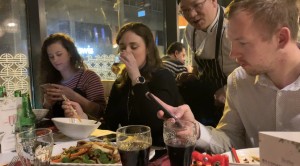 On to the important business of the food. Usually a help yourself basis, as guests, the dishes we are to try as part of the celebrations are bought to our table by the chef, James. He explains each to us. 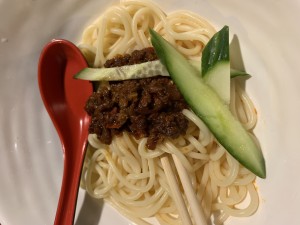 First up we are given a bowl of longevity noodles (for a long and healthy life). We are told the more we mix them the greater the flavour becomes. He’s not wrong. The warm spices coat the noodles and give a fiery flavour. James also gives us 8 slices of cooked pork with crackling. 8 being the number of prosperity. 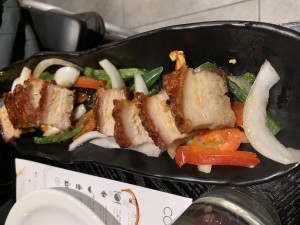 Next up its blackened Pork loin, followed by many others dishes including seafood and, the dish which was the cause of many surprised faces last year, the saliva chicken. 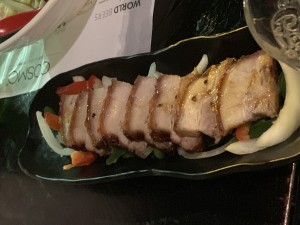 Its actual name translates as ‘mouth-watering chicken’ it is boiled first to make it tender and moist and is served cold with peppercorn and their own homemade chilli oil, which they make at Cosmo. 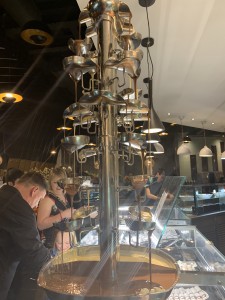 Of course, what visit to Cosmo would be complete without a visit to the dessert area. I always manage to make room for dessert no matter what – the trouble was, deciding which. I was torn between profiteroles and the wonder of the chocolate fountain and good old English pud, the apple crumble. Theres even sweets if you still have room.

I considered the possibility of actually just bringing my laptop and stopping all afternoon one day, not because the with the ‘all you can eat’ buffet doesn’t offer exceptional value for money, it does, but just in an attempt to try and work my way through the 150 different dishes on offer.

Imagine that – step into my office would you, oh and bring an eclair.

Disclaimer : Press Gifted but my views are my own