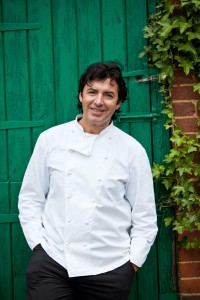 Multi-Michelin star chef Jean-Christophe Novelli MBE will make his debut at the Festival of Food and Drink, held at Worksop’s Clumber Park on the 18th and 19th September 2021.

Jean-Christophe, who will appear on Sunday 19th September, is known around the globe for his amazing cooking artistry and unique healthy cooking techniques. He’s cooked and consulted on many projects, and catered for Heads of State, Royalty, and renowned personalities around the world.

He began his career at the tender age of fourteen as a baker in his hometown of Arras, Northern France before becoming Private Head Chef to Elie de Rothschild at just 19 years of age.

Moving to the UK in 1983, he worked in several well-known establishments but Jean-Christophe’s life changed completely in 1989 when invited by Keith Floyd to take charge of ‘The Maltsters’ as the Chef Patron, leading to his move to the Gordleton Mill in Hampshire where he won his first Michelin star after only a year.

He became head chef at the Four Seasons Hotel in Park Lane with another Michelin star immediately gained before starting his own chain of restaurants around the world, gaining many more stars and awards along the way. Jean-Christophe opened The Novelli Cookery School at the 14th Century Crouchmoor Farm in Hertfordshire with his wife Michelle in 2005.

Earlier this year, Jean-Christophe was awarded an honorary MBE by Her Majesty the Queen in recognition of his many acts of ‘voluntary and charitable service’.

Festival director Bev Channell said: “We’re so excited to be back at Clumber Park this year, and even more so now we’re going to be joined by Jean-Christophe. He has an amazing amount of knowledge to share not to mention incredible anecdotes from his exciting career.”

Now in its eighth year, the Festival of Food and Drink brings together around 150 artisan food and drink producers from the local area and beyond. Celebrity chefs host demonstrations and autograph signings while the School of Artisan Food offers workshops for both adults and children.

The biggest event of its kind in the region, the festival vibe is enhanced by live music throughout the weekend, with the stage area surrounded by Street Food vendors and Pop-Up Cafes.

Ticket prices start from just £10 in advance for the Festival of Food and Drink with free admission into Clumber Park included (usually £5 per adult). VIP and family tickets also available. Children aged five years and under are admitted free with a paying adult. For more info, visit www.festivaloffoodanddrink.com