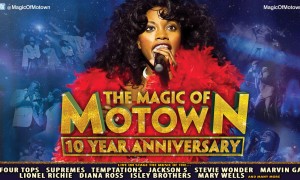 The Magic of Motown is returning to Nottingham for its 10 year anniversary.

Revel in hit after hit as the incredible, all-new for 2016, theatrical treat with a huge cast marks 50 years of Reach Out and a decade of continuing the legend of solid-gold artistes the Supremes, Temptations, Jackson 5, Isley Brothers, Stevie Wonder, Marvin Gaye, Diana Ross, Lionel Richie and more.

The captivating concert show oozes the style, sophistication and musical brilliance of these megastars as more than 36 classics are revived amid a flurry of glittering costume changes, starring all the dazzling dance moves and superb musicianship of the original artistes. In 1966 The Four Tops’ signature tune was a No1 hit both sides of the Atlantic – Reach Out also enjoys the distinction of being acclaimed as this stunning production’s stand-out performance. Book now and truly Reach Out for the Magic of Motown. Click here to book tickets at Royal Concert Hall for 23rd September 2016 or…

We have teamed up with EasyTheatres for the chance to win a pair of tickets to go and see the show and meet the cast before they perform live on stage. Ever wondered what life is like behind the scenes of an EasyTheatres production? Well now’s your chance! For your chance to win a pair of tickets, simply answer this simple question: In which American city was the Motown label based? Submit your answer by using the form below. The winner will be drawn and contacted on 23rd August 2016.