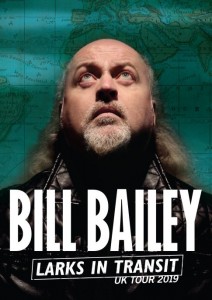 As any Bill fan would expect he treated us to a combination of eloquent rants and musical delights. We also went on a few educational tangents including learning the origins of giving someone the finger. There was a mild dose of politics throughout the show, especially as it was the day after May resigned (somewhere a robot cried WD40), but it wasnt to heavy going and always comical.

Despite it being at such a large venue, Bill was engaged with the audience and got some interesting heckles, including being interrupted by a moth prompting him to question when the last show in the arena was!

In the second half it was more about the music. The remixes of songs were a mix of both comedy and musical genius, there were owl and bird sounds added to a Nikki Minaj song and a wonderful funny version of Summer Holiday – British Holiday.

For the encore there were the bells of rock and he demonstrated that it wasn’t just Ed Sheerhan who can loop live, “move over Ed”.

I can confidently say Larks in Transit is one his funniest tours yet, the arena was full of laughter and the odd bit of dancing, despite Bill thinking Nottingham had the oddest reactions he had ever come across! Yay go Nottingham!