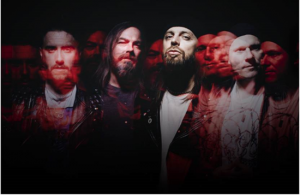 BULLET FOR MY VALENTINE TO RELEASE SEVENTH STUDIO ALBUM BULLET FOR MY VALENTINE ON 22 OCTOBER 2021
FIRST SINGLE/ VIDEO, “KNIVES”, OUT NOW
UK HEADLINE NOVEMBER 2021 TOUR REVEALED
Today, Bullet For My Valentine announce their self-titled, seventh album, Bullet For My Valentine. The album, which will be released on 22 October 2021, via Spinefarm Records/ Search & Destroy, sees the band open a bold new chapter and is easily their heaviest, fiercest album so far.
“This is the beginning of Bullet 2.0,” says vocalist and lead guitarist Matt Tuck. “It signifies where we are right now. The music is fresh, it’s aggressive, it’s more visceral and passionate than it’s ever been.”
Bullet For My Valentine follows the success of their last album, 2018’s Gravity, which saw the metal juggernauts play their biggest shows to date, including a UK arena tour and a massive show at London’s Alexandra Palace. But this time around, the band have taken things back to basics. Bullet For My Valentine is stacked with squealing solos and monstrous riffs that will delight fans both new and old.
“I think it’s the most ferocious side of Bullet For My Valentine that I’ve ever known,” says lead guitarist Michael “Padge” Paget. “It’s time for us to put out a really angry, heavy, aggressive record. I just can’t wait to grimace on stage!”
“I wanted to come out guns blazing, fucking middle fingers flying and just go for the throat,” agrees Tuck. “I think this is a far more aggressive, intense part of Bullet For My Valentine. It’s always been there, I’ve just never opened the floodgates on it. I want to take people’s heads off, in a metaphorical way.”
True to their word, first single, “Knives”, arrives like a punch in the face
Tuck began writing the album in September 2019 before the Coronavirus pandemic brought things screeching to a halt in early 2020. But in June 2020, Tuck and long-time producer, Carl Bown, who co-produced the band’s 2015 album, Venom, and produced and mixed Gravity, picked up the pace again. Together, they hunkered down at Treehouse Studio in Chesterfield, where the remainder of the album was written.
Aptly self-titled, the band have triumphed, creating an album that will cement their place at the very top of modern British metal.
Pre-orders for Bullet For My Valentine’s seventh studio album are now live, with an instant download of the first single, “Knives” and special bundle options, including a unique clipping from the backdrop used on the bands ‘Venom’ world tour from 2015 – 2017, t-shirts, hoodies, gold & silver cassettes and ltd. vinyl. Order your copy HERE.
Tickets go on sale at 10am on Friday 25 June 2021, with prices starting from £38.23. All prices listed include admin and facility fee.
Tickets can be purchased online at https://www.motorpointarenanottingham.com/online/article/bullet-valentine. Tickets cannot be purchased in person at the venue.
Bullet For My Valentine November UK tour dates:
Oct 31: Nottingham Motorpoint Arena
Nov 01: Edinburgh Corn Exchange
Nov 02: Hull Bonus Arena
Nov 04: Manchester O2 Victoria Warehouse
Nov 05: London Eventim Apollo Hammersmith
Nov 07: Cardiff Motorpoint Arena
Nov 09: Brighton Centre