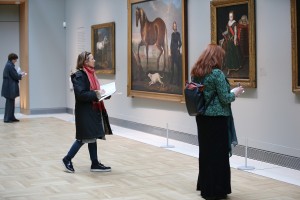 The Harley Gallery on the Welbeck estate in Nottinghamshire has launched a search for Britain’s most exciting artists by inviting them to enter the ‘Harley Open’, its popular biennial art competition.

Artists of all ages and experience can enter their art and are encouraged to let their imagination run riot. The only conditions are that entries can hang on the wall and have been made in the last two years. Entries should be submitted on the Harley Gallery website (Harley Open) by 21 May.

Director of The Harley Gallery, Lisa Gee explained: “The Harley Open gives us an exciting insight into what Britain’s artists are making now. We love getting entries from established artists but it’s just as important to us to see work by people who are just starting out, or maybe haven’t shown their work in a gallery very much before. We get entries that are serious or funny, detailed or abstract, traditional or really wacky! It’s the diversity that makes the Open so successful, it gets a lot of visitors and we are able to sell many of the entries for our artists”

A judging panel will select around 140 of the entries to go on show in an exhibition which opens at The Harley Gallery on 24 June.

As well as the Harley Prize of £750 the winner also gets a solo show alongside the next Open Exhibition. Competition entries are assessed by an expert panel with judges including Hannah Obee, Exhibitions Curator at Chatsworth; Geoff Diego Litherland, Artist; and Lucy Phillips, Director at Leicester Print Studio. Other prizes include the Judges Prize of £500, sponsored by Welbeck Estates Company and the ‘People’s Prize’, voted for by the visiting public.

The winner of the 2015 Harley Open, Olivier Leger (http://bit.ly/2kFr99F), has since exhibited across the UK and abroad and will have a solo show of some 20 works at The Harley Gallery running alongside this year’s selected entries: “My drawings are ecological imaginations of fantastic animals, their physiology and ecosystem inter-connections. They are fabricated using fine line pens to achieve intense levels of details and to create a vast degree of visual discovery. Winning the Harley Open gave me a profile I hadn’t had before and access to other galleries and audiences who were able to see my work for the first time.”

The Harley Gallery opened in 1994 and was constructed within the ruins of the Victorian gasworks which were built by the 5th Duke of Portland to power his family home at Welbeck. It has exhibited contemporary work by artists such as David Hockney, Grayson Perry and Sir Peter Blake and its newest addition is a purpose-built gallery space for the masterpieces of The Portland Collection, assembled over 400 years by the Dukes of Portland and including works by Michelangelo and Van Dyke.