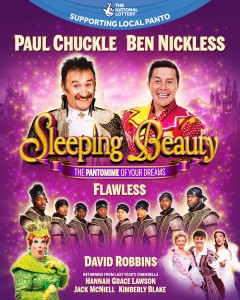 The Theatre Royal Nottingham and pantomime producers Qdos Entertainment have today announced that a socially-distanced pantomime will be staged at the city centre venue once national restrictions are lifted, with an all-new production of Sleeping Beauty, thanks to support from The National Lottery. Starring legendary funny-men Paul Chuckle and Ben Nickless, with street dance stars Flawless, the show will play from Saturday 12 December for a strictly limited 3 week run.

Safety for customers, staff and performers is the venue’s number one priority and these socially distanced pantomime performances will adhere to all national government guidance and local restrictions.   Measures in place to keep everyone safe will include socially distanced seating, electronic ticketing and flexible returns policy, one-way systems, hand sanitiser stations, temperature-checking and enhanced cleaning procedures.  For more details on what a socially distanced visit to the venue will look like, please visit trch.co.uk/covid-19-measures

The production is able to go ahead thanks to the support of The National Lottery, which will give thousands of theatregoers, in Nottingham and across the country, the chance to enjoy socially distanced pantomime this Christmas. The show is being staged as a result of an initiative between The National Lottery and Qdos Entertainment which is providing financial support for theatres to stage socially distanced, live pantomimes this festive season. This will make it viable for venues, including the Theatre Royal, to open their doors to the general public, generating vital income for the theatre and helping to restore jobs while providing much-needed cheer for pantomime lovers.

Best known as one half of the legendary Chuckle Brothers, Paul Chuckle will play the role of The King. The much-loved duo were known to generations of children for their popular prime-time children’s television showChucklevision, of which more than 290 episodes were made. The series proved to be so successful that in 2008 BAFTA presented Paul and his late brother Barry with an award for ‘services to British children’s television’. During the mid-nineties the pair recorded three series of their own TV game show and have toured the UK extensively, even releasing a charity single with Tinchy Stryder and performed in over 50 pantomimes at major venues across the UK every Christmas. Paul last appeared in pantomime at the Theatre Royal in Jack and the Beanstalk in 2016.

Making a welcome return to the Theatre Royal will be comedian Ben Nickless as Muddles. Having started his working life playing the comedy clubs of the North West, Ben’s career took off in 2006 when he performed his own style of comedy and impressions on the BBC Television series Let Me Entertain You, winning his episode. Ben has proven to be one of the country’s most popular pantomime performers, including a nomination for Best Comic at the Great British Pantomime Awards. Sleeping Beauty marks Ben’s return to the Theatre Royal having previously starred alongside Sherrie Hewson, Biggins, Lesley Joseph and David Hasselhoff in their previous festive productions, as well as his own one-man show.

Street dance troupe Flawless, who will star as The Queen’s Guards, were made world famous having competed in the third series of ITV’s Britain’s Got Talent, and have been a mainstay of the hip-hop dance scene for over a decade. Having been formed by Marlon Wallen and Amelia Benoit in 2005, the group won the annual National UK Street Dancing Championships and made their television debut on the BBC’s The Slammer. Since then they appeared in the dance movies StreetDance and StreetDance2, collaborated with Kylie Minogue (by Royal Appointment) and have appeared in numerous pantomimes for Qdos Entertainment.

They will be joined by hilarious pantomime dame David Robbins as The Queen, back again after starring as Ugly Sister in Cinderella in 2012 and west end musical stars Kimberly Blake, fresh from her west end role in Pretty Woman as The Enchantress, and Hannah Grace Lawson as Princess Beauty. Completing the line-up is Jack McNeill as the Prince, marking his third consecutive Theatre Royal pantomime having starred in the title role of Peter Pan, and Dandini in last year’s production of Cinderella. This year’s pantomime will be directed by Guy Unsworth, who also directed last year.

Portfolio Holder for Leisure, Culture & IT at Nottingham City Council, Councillor Dave Trimble, said: “Pantomime plays an enduring and much-loved part in our city’s rich cultural life, a festive highlight which has marked each and every year since the Theatre Royal’s very first pantomime in 1865.  Many people’s first memory of coming to the theatre will have been a family trip to the panto.  Once theatres are allowed to safely reopen again, we very much look forward to welcoming audiences back this Christmas, after what has been an incredibly challenging year for us all.  We can’t wait to see everyone and share some much-needed festive cheer!”

This year’s production, created especially for the Theatre Royal Nottingham in this unprecedented year, will be a riotously funny, one-act celebration of pantomime, packed full of comedy and laughter and allow audience members the opportunity to come safely together and enjoy the magic of the much-loved and unique art form this festive season.

The previously advertised production of Robin Hood will be staged in 2021 and existing bookers have already been contacted with details of their new tickets.

The support of The National Lottery will ensure that socially distanced panto can take place this year at the Theatre Royal, and other theatres across the UK. Up to 20,000 free tickets to pantomimes across the country, including in Nottingham, will be made available to National Lottery players to thank them for making it possible for this Christmas tradition to go ahead. National Lottery players raise on average £30M each week for Good Causes.  This year has seen up to £600M in National Lottery funding being used by charities and organisations affected by the impact of the coronavirus outbreak across the arts, community and charity, heritage, education, environment and sport sectors.