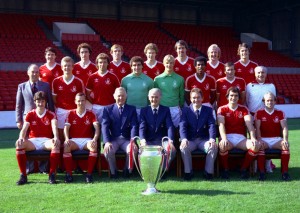 The legendary players who put Nottingham Forest firmly on the European footballing map in the late 1970s and early 1980s will recount stories of their days at the City Ground leading up to their triumphant back-to-back victories in the European Cup in Munich (1979) and Madrid (1980). Climbing from mid-table Second Division to double European Cup-winning champions in less than four seasons is a feat that will almost certainly never be repeated.

The audience will be able to re-live the golden era when the Reds were the Kings of Europe under the incomparable leadership of Brian Clough and Peter Taylor. The evening will be compered by BBC Radio Nottingham’s Forest correspondent Colin Fray. “I’m very much looking forward to hearing the stories of what was happening behind the scenes at the time of some of Forest’s greatest successes. The players have some great tales to tell, and there’s usually a surprise or two in there somewhere, as well,” he said.

Former player and Forest legend, John McGovern, says of the show: “They say that quality lasts whether it is England fans who vividly remember the superb 1966 World Cup winning team, or league fans who remember the likes of Charlton, Best, and Law at Manchester United. They are the quality that people never forget. In years to come whenever football fans talk about great teams they will remember Nottingham Forest, whose feat of winning two European Cups three years after winning promotion will forever be remembered as miraculous.”
Jonathan Saville, Director of Sales, Marketing & Development at the Theatre Royal, said: “To have the players who made Nottingham Forest the Kings of Football in Europe together again is sure to be a very special night. We are delighted that they will be able to share their recollections with the audience on the Theatre Royal stage. For Forest fans across all ages this is an amazing chance to sit and listen to the players as they talk about Brian Clough, Peter Taylor, and the adventures this amazing management team took them on.”

Don’t miss out on this opportunity to see these great players all together once again and hear the stories that helped make Nottingham the City of Legends.