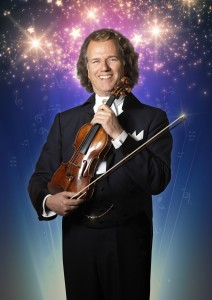 TICKETS ON GENERAL SALE 9AM FRIDAY 5 MAY

André Rieu is quite simply a musical phenomenon like no other, having sold a massive 40 million CDs and DVDs and notched 30 No.1 chart positions worldwide. Along with his 60-piece Johann Strauss Orchestra (the largest private orchestra in the world), André has created a global revival in waltz music, staging spectacular extravaganzas which are second to none. Having received over 500 Platinum Awards, three Classical Brit Awards for “Album of the Year” and billions of Youtube views, André is one of the biggest solo male touring artists in the world. Each year his passionate live shows attract more than 600,000 fans and outsell mega artists such as Coldplay, AC/DC and Bruce Springsteen.

“My concerts are about joy and love!“ says André Rieu. “We should make decisions in our lives with our hearts, not our heads. People often ask me ‘how do you choose your program?’ – the answer is: with my heart. I love Johann Strauss but I am also fascinated by Andrew Lloyd Webber or Bruce Springsteen. We should stop limiting ourselves with categories and boundaries – not just in terms of music but in our lives in general”

Before returning to the UK and Ireland, audiences will also be able to live the André Rieu experience over the 22nd – 23rd July, as he looks forward to welcoming them via satellite in local cinemas to his hometown. The record breaking Maastricht concert in cinemas in 2017 will hold extra special significance, as it marks 30 years since André formed the Johann Strauss Orchestra.

On stage André’s incredible musical prowess, passion and charisma make for a magical spectacle. His romantic and fun shows are the only ones where people regularly jump to their feet and dance in the aisles. It’s not uncommon to see devoted UK fans laughing, weeping, clapping, dancing and embracing when they listen to the beautiful waltzes, film scores, spirituals, musicals, folk songs and Christmas carols. His shows are a perfect mix of thrilling, romantic, festive and emotional melodies combined with surprises, balloons, beautiful soloists and of course André’s great sense of humor.

Tickets can be booked online at https://www.motorpointarenanottingham.com/online/Andre-Rieu via 0843 373 3000 or in person at the Motorpoint Arena Box Office, Bolero Square, The Lace Market, Nottingham, NG1 1LA.