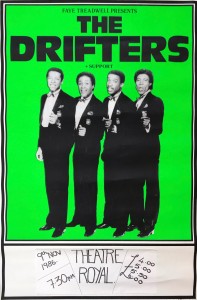 The smash-hit West End sensation, Motown The Musical opens in Nottingham next week and music fans across the East Midlands are being encouraged to share their own special Motown memories to mark this momentous occasion.

Motown The Musical tells the story of Berry Gordy’s world-famous Motown record label, which gave rise to huge stars such as The Jackson 5, Diana Ross and the Supremes, Stevie Wonder and Marvin Gaye. The production opens at the Theatre Royal Nottingham for a two-week run from Tuesday 23 April to Saturday 4 May.

The record label celebrated its 60th anniversary in January this year and, to mark the anniversary, fans are being encouraged to share their memories of Motown legends performing in Nottingham over the decades since.

Many original Motown legends have appeared at venues across the city since the early days of Motown. Perhaps the earliest being Little Stevie Wonder, aged just 15, at the Dungeon Club in 1965.  Other iconic Motown artists who have appeared at the Theatre Royal and the Royal Concert Hall include The Drifters in November 1986, The Four Tops in February 1989, and Smokey Robinson in July 2007.  The Motorpoint Arena has seen many of Motown’s original stars grace its stage, too, including Diana Ross and the Supremes in May 2007, and The Commodores and Martha Reeves and the Vandellas in June 2009.

With music and lyrics from the Motown catalogue and book by Motown founder Berry Gordy, Charles Randolph-Wright’s production features a live orchestra playing 50 Motown tracks including Ain’t No Mountain High Enough, I’ll Be There, Dancing In The Street, Stop! In The Name Of Love, My Girl, I Heard It Through The Grapevine and tells the story behind the classic hits.

Motown The Musical and the Theatre Royal are appealing for anyone who has seen original Motown artists performing in Nottingham to share their unique experiences, in Motown’s heyday in the 1960s and in the following years. If you were part of one of these performances, or have pictures and anecdotes from family members who were there, then we want to hear from you!

ANNOUNCED: ON SALE AT THE THEATRE ROYAL & ROYAL CONCERT HALL