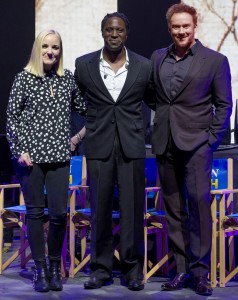 Featuring the Voice of

A video has been released to showcase brand new musical Heaven on Earth.

Telling the story of Adam and Eve Heaven on Earth will be touring arenas across the UK from December 2017 through to May 2018.

More than 200 guests attended the official launch of the show at Wembley Arena where both Russell Watson, as the Voice of God, and Hugh Maynard, who plays Adam, gave everyone a taste of what to expect by performing.

Also starring Kerry Ellis, Heaven on Earth is a classic re-telling of the story of Adam and Eve and their fall from Paradise.  It is an exhilarating story of love, loss, and redemption, and an exploration of the universal search for the meaning of life.

This spectacular new musical is brought to audiences by Eden International Productions and journeys back to the very beginning of time.

Tickets are on sale now from www.seetickets.com

A huge production is planned which will see the Garden of Eden created in all its magnificent glory and a whole host of special effects including fire, water and animatronics.

Writer Sara Jeffs is the creator behind the script, music and lyrics.

She said: “It is so very exciting to see my script coming to life in Heaven on Earth.

“This brand new musical, and its original emotive songs, will resonate with people of all ages and backgrounds, and stay with the audience long after they view this thrilling and visual treat of a production.

“The story of Adam and Eve is the oldest and greatest story ever told and whether you are someone with faith or someone who just enjoys the theatre and a great show this will appeal to you.”

For further details about Heaven on Earth go to www.heavenonearththemusical.co.uk