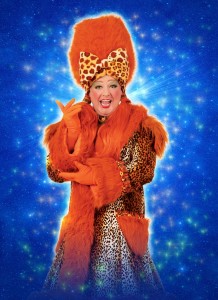 The Theatre Royal Nottingham have announced their star-studded line-up for the ultimate family pantomime this festive season, starring Coronation Street’s Les Dennis and Connor McIntyre who will swap the cobbles for clutch bags as the Ugly Sisters, alongside Pop Idol star Gareth Gates as Prince Charming, with Richard Cadell and Sooty starring as Buttons from Saturday 30 November.

Television presenter, comedian and actor Les Dennis has been a mainstay of British entertainment since he won the 1974 talent show New Faces. His appearance propelled him to stardom with featured spots on light entertainment shows including The Laughter Show and Les hosted Family Fortunes for an unprecedented fifteen-year run. His theatre work includes roles in Chicago, Spamalot, She Loves Me and Me and My Girl in the West End, the UK tours of Art, High School Musical, Hairspray, Legally Blonde and The Addams Family playing Uncle Fester. His film and television credits include Intimate Relations opposite Julie Walters, Brookside, Hotel Babylon, Merseybeat and Extras. In 2014, he joined Coronation Street as Michael Rodwell, a petty criminal who met his demise at the hands of his fellow Ugly Sister, Pat Phelan. 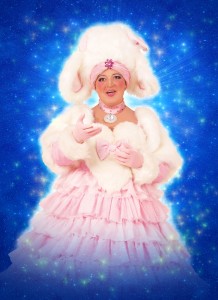 Connor McIntyre has previously appeared in The Governor, A & E, Murder City, See No Evil, Wire in the Blood, Law and Order, London’s Burning andCasualty. His film roles include The Be All and End All and Charlie Noads R.I.P while his stage work includes appearances in The Comedy of Errors, One for the Road and Harry’s Christmas. He is best known as the malevolent mainstay of ITV’s Coronation Street, Pat Phelan, since he made his debut in 2013. Connor rose to fame playing the villainous Pat Phelan, where he has been embroiled in numerous high-profile storylines solidifying his reputation as one of soap-land’s ultimate baddies. 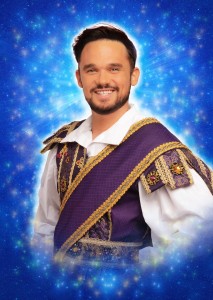 Gareth Gates rose to stardom in 2002 as runner-up in the UK’s first Pop Idol. In a phenomenal career that followed, he has sold more than 3.5 million records in the UK, released three albums and had four UK number one singles.

Alongside his pop career, Gareth has been seen on ITV1’s Dancing on Ice and The Big Reunion 2014. Gareth’s theatre career has seen him play the role of Marius in the 25th anniversary tour of Les Misérables for Sir Cameron Mackintosh, in Loserville at West Yorkshire Playhouse and the UK tours 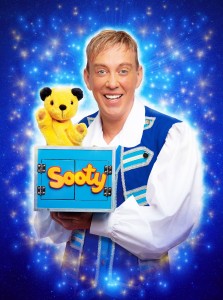 his cheeky sense of humour, jaw-dropping magic tricks and hilarious mishaps, despite not ageing whatsoever.

Ably supported by his original owner and friend Henry Corbett (and later his son Matthew) Sooty became a regular on the BBC’s Saturday Special, and fronted his own programmes The Sooty Show and Sooty & Co. More recently, he appeared on CITV’s Sooty and Sooty Heights. He holds the Guinness World Record for the longest-running continuing children’s programme in the UK. He also got into all sorts of trouble when his original owner Henry Corbett received the OBE, whereupon he squirted His Royal Highness Prince Philip with water but received his own miniature version of the accolade nonetheless.

Cinderella will be once again be produced by Qdos Entertainment, the world’s biggest pantomime producer, continuing their long-running partnership with the Theatre Royal Nottingham, following last year’s swashbuckling production of Peter Pan.

Michael Harrison, managing director of Qdos Entertainment’s pantomime division said: “I’m thrilled that we have managed to secure Les, Connor, Gareth, Richard and Sooty to lead our spectacular Nottingham pantomime this year. Between them all we have fantastic comedy, music, magic and silliness that audiences of all ages will love in a production packed full of audience participation, laughter and pure panto magic.”

Jonathan Saville, interim venue director at the Theatre Royal Nottingham, said: “We are so excited to announce a really strong pantomime cast line-up today.  Cinderella is already such a beautiful and well-loved story, and I think the sheer talent and comedy value this cast can bring will raise this year’s panto to another level.  Our Ugly Sisters will be unrecognisable from their Corrie personas, so that alone will be a treat for all the soap fans in the audience.  Alongside Gareth’s wonderful voice, and Richard Cadell and Sooty’s comedy and magic tricks, we hope this years’ show will have plenty for everyone to enjoy.”

Don’t miss your chance to see Cinderella, the Fairy Godmother of all pantomimes. The clock is ticking…book your tickets to the Ball today!