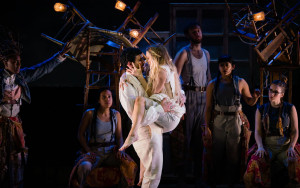 A novel by Emily Bronte (1847), adapted for the stage by Emily Rice, creative director of Wise Children, a creative and education organisation founded by Emily Rice. Emily Rice has a lot to do with this show, and she has smashed it!

First of all, an admission, I haven’t read the book, though I am aware of the story. For those of you like me who haven’t read the book, the story follows the lives, loves and betrayals of the masters of Wuthering Heights. Set over three generations, the general premise of the story follows the ripples that proceed from the introduction of an outsider into an elitist and insular society. “I shall name you Heathcliff”. What follows is an explosion of love, rejection, fear, tragedy and brutality; but throughout it all there is a strong hint of possible redemption. Considered a literary classic, the book offers a glimpse into a world of the past. The show offers an enjoyable and fun window into this world, which whilst has moments of genuine fear and danger, these are coated in music and dance so simply serve as a vehicle to drive the story. Suitable for older children (12+) and a great way to introduce the story to older teenagers who may be studying it as part of their school curriculum. 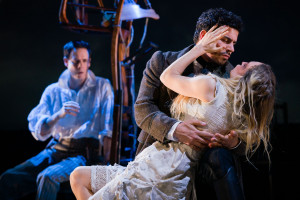 From the first scream (Lucy McCormick as Catherine), which came within the first few seconds of the first scene, to the last cry of hope, the actors gave this showing their all. They sang and danced and acted and generally entertained a packed crowd for two and a half hours with a half hour break for us to catch our breaths. Lucy’s depiction of Catherine falling into despair through rock song was a personal highlight for me, powerful and evocative, she has a true stage presence. Liam Tamne as Heathcliff gave a solid performance. At times moody and aloof, otherwise wild eyed and electric, his mood shifted as fast as the wind on a wild night on the moors. His accent coming and going depending on whether or not he was trying to fit in was a nice touch. The cast gave a spirited and enjoyable performance with some standout moments, many of them involving Katy Owen as the Linton Mother and Little Linton.

The set design was awesome, the staff were moving bits around during the show, a massive fan was used to blow people’s hair in the wind, a puppet skeleton dog controlled by staff, a tree, some fancy rain projection and you could be forgiven for holding your coat tight against the storm. The projection was amazing (Simon Baker) and the costumes as good as any I have ever seen. The show tackled some really dark themes with wit and sensitivity and the audience got a real sense of how cruelty begets cruelty. We got the happy ending we deserved and the cast and crew got the standing ovation they deserved (my hands hurt for days afterwards!). Overall a great show for fans of Emily Bronte, fans of theatre and people that just like to be entertained.