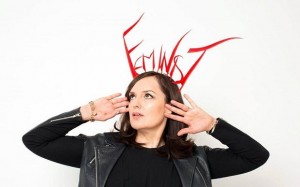 Deborah Francis-White took her amazingly successful podcast (65 million downloads) The Guilty Feminist, on tour and it arrived at the Royal Concert Hall on Friday night.

Fans and newcomers alike were treated to her comedy feminist genius in this amazing live ‘variety show’, starting with Deborah and her guests making some guilty “I’m a feminist but…”confessions.

Deborah acted as compère for the evening and took advantage of this role to have as many outfit changes as possible starting with a bespoke green sequinned cape like a total fem-Jedi and also to do the best merchandise plug anyone has ever seen.

Heidi Regan was up first up, an Australian comic with zany stories that had the audience cracking up. Deborah then returned to the stage to conducting/conning the audience into reenacting an orgasm! Very surreal!

We were then treated to some sexy stand up from Keemah Bob, before Grace Petrie showed off her incredible voice. If you haven’t heard of her before she is a funny punky feminist protest singer and a beautiful soul. Check her out when she comes to The Rescue Rooms later this year.

After the interval, some local feminists joined the panel on stage from Nottingham’s women’s centre and Nott Normal; inspiring and encouraging everyone to do their bit locally.

Jessica Fostekew was absolutely hilarious, had some of us crying with laughter with totally relatable comedy.

The audience was dominated by white middle class middle aged women, but as it’s not in the spirit of the show we won’t judge them apart from to say they thoroughly enjoyed it and showed mega appreciation including a standing ovations for the incredibly talented Grace Petrie, who returned to the stage to treat us to a musical singalong finale.