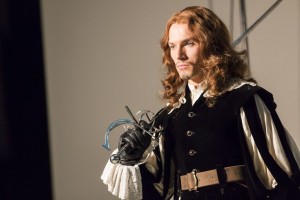 If you’re familiar with The Three Musketeers then you will know that the story is fairly complex, which is why when I saw it had been made into a ballet I was intrigued. If you’re unaware of the plot jist then you may want to brush up on your Alexandre Dumas prior to attending one of these performances – either that or ensure you purchase a programme – because I was left with far more questions than answers.

Focusing more upon the misbehaving antics of Queen Anne and D’Artagnan’s quest to become a musketeer, the staging feels rushed in parts and slow to start in others. The opening scene on the Streets of Paris, catapults the audience into the centre of the action, so many characters appear on the stage in quick succession that those unfamiliar with the plot will quickly lose track.
The fast pace of the first scene is contrasted by the slower pace of the fight scenes, of which there are plenty of in this tale! I say slow because there is nothing to hook the audience into any of these scenes; it would seem there are only so many ways to swish a sword in a ballet.

D’Artagnan, played by Kevin Pueung, is handsome, nimble and quick. His movements are rhythmic and well-disciplined – but there is a lack of personality, even as the plot progresses. I expected to fall in love with him, but I was quite happy for Constance to instead.

The casting was a little off here too. I felt there was a complete lack of chemistry in the pairings of this ballet. Queen Anne (played by Nina Queiroz da Silva and Buckingham’s (played by Joseph Taylor) choreography looked strained in parts and unbalanced in others. The final scene of act 1 at Madame Bonacieux’s house which sees D’Artagnan and Constance express their feelings for one another, in what is a well-choreographed duet lacks tenderness and believability.

It’s strange to see slapstick comedy done so well in a ballet though – all three of the musketeers really rise to this challenge and I enjoyed watching them play drunk a little too well!

There is absolutely no doubt that the musical score composed by the late Sir Malcolm Arnold is stunning, with slight elements of his earlier score for Whistle Down the Wind being hinted at, however I think it missed the opportunity to really set the scene of a French backdrop.

The set has to be the most impressive set I’ve ever seen on a stage outside of London, ornate, intricate and detailed. The way the dancers were able to subtly interact with it to signify movement, entrances and exits really was superb.

It took me 29 years to realise that I was a fan of the ballet, the emotions that can be stirred from slight flicks of the head, facial expressions and the odd pirouette has always fascinated me. The very idea that sacrifice, love, exaltation and pain could be communicated without any words at all, just the fluidity of movements is what makes a ballet for me – but it seems that in this staging fluidity was replaced by hand gestures which had you hoping the characters would get to the point much quicker than they eventually did.