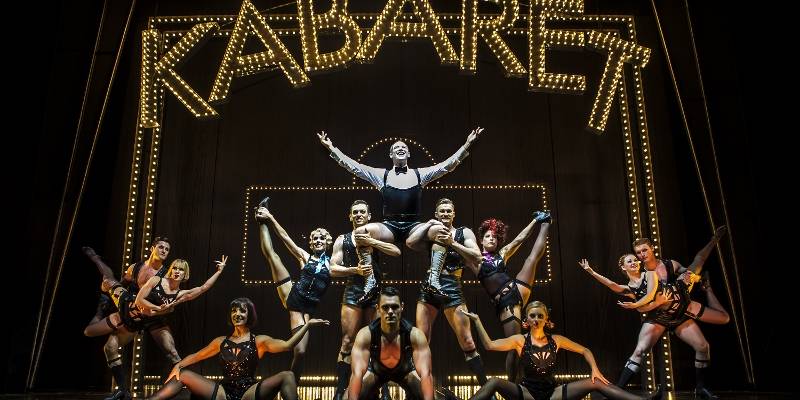 “What good is sitting alone in your room? Come here the music play!” Life really is a cabaret “oh chum!” but maybe not so much in 1930s Berlin, because spoiler alert: this musical does not have a happy ending – as much as Emcee (played by the captivating John Partridge) would have you believe that it does.

The clock has just struck midnight on New Year’s Day in 1931 and Berlin is a haven of hedonistic decadence and debauchery as the legendary Sally Bowles (played by the stunningly talented Kara Lily Hayworth, known for her title role in Annie as well as originating Cilla Black in Cilla: The Musical) is about to take centre stage at the famous Kit Kat Klub. Just a few hours earlier aspiring American author Cliff Bradshaw (played by Charles Hagerty) had arrived in the city and while visiting the club to reconnect with a gay lover, Bobby, from an offstage illicit affair in Paris, he becomes captivated by the glamourous English cabaret superstar, Sally and is quickly plunged into the seedy surroundings of Berlin’s underground club scene.

Kara Lily Hayworth is every bit sexy and seductive. Her sassy outfits leave very little to the imagination but she’s got the figure for it. Her musical numbers are big, and by big I mean huge, but she’s got the voice for it. Combine that with her sultry strut and the memories of first watching Liza Minnelli in the 1970s film adaptation come happily flooding back.

Her rendition of iconic number “Cabaret” and “Maybe this time” are still sending chills down my spine at the very thought. Owning every inch of the spotlight with each number, she earned huge cheers of applause from the crowd and had many of us believing we were right in the heart of the Kit Kat Klub.

The wonderful thing about watching this show was that every aspect was flawless. From Partridge’s embodiment of the sleaze and immorality of the club scene with every passionate thrust of his pelvis and his hyperbolic embraces of female and male cabaret dancers alike – through to Hagerty’s annoyingly believable panicked pleas.

Each scene was like a game of spotlight tennis with the audience’s eyes and ears darting from one precise and powerful dance move to another tongue-in-cheek line or perfectly sung note.

I’ve seen Partridge in some performances before – but never like this. Whenever he was on stage, he commanded our senses with every smile, gesticulation or eye-roll. A particular favourite had to be the final scene of Act One, “Tomorrow belongs to me,” which sees Partridge, as Emcee, take on the role of a puppeteer stood upon a dictatorial lectern, looking down onto his dancing puppets which he controls, on strings, before shapeshifting into a parody of Adolf Hitler – thanks to clever makeup.

Playing upon the audiences emotions we don’t know whether we’re supposed to laugh or cry, so Partridge, does both!

While the Kit Kat club serves as the metaphor for the changes in the political landscape of Berlin at that time, there is a second narrative which exposes the reality of the situation in German landlady Fräulein Schneider (played by the infamous Anita Harris) and her doomed relationship with Jewish elderly fruit vendor, Herr Schultz (James Paterson). Having said yes to his proposal of marriage in the midst of rising opposition to the Jews it is impossible to not predict the tragic narrative the plot is about to follow.

Behind the partying, glitz and glamour, the mounting pressure as the Nazis imminent rise to power, continues, about to alter the lives of those in and around the Kit Kat Club forever.

Renowned singer and actress Harris’ performance is emotive and tear jerking as she made musical numbers “So What?” and “What would you do?” her own. The audience cannot help but “oooh,” “ahhh” and “sigh” on cue. Her numbers are a stark contrast to those in the Kit Kat Klub, with supporting casts of dancers and backing vocals, but her performances, with the support of Paterson fill every nook and cranny of the stage with emotion.

With a clever contrast of excitement and erotica to the dark, tragic scenes of inescapable dread and political dispute the atmosphere and rising tension built up through the clever costume changes, makeup, choreography and melodrama by the entire supporting cast of male and female dancers is just spectacular.

After witnessing one of the most powerful final scenes of a theatrical show I have ever seen in Bill Kenwright’s adaptation of Rufus Norris’ multi-award winning Cabaret, I rushed home and considered booking tickets to watch this musical rollercoaster all over again.

Tickets are still available for showings today and tomorrow, get your tickets here www.trch.co.uk